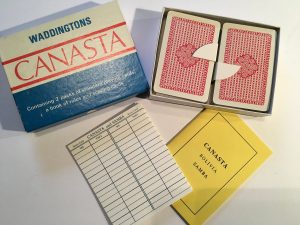 Canasta (“basket” in Spanish) became a big hit with millions of Americans in the 1950’s when it arrived from South America along with other cultural imports like the Samba and the Bossa Nova.  Today the game is enjoying a resurgence.  It’s fun to play, and high-scoring.

2 packs are needed, with a total of 4 jokers All jokers and 2’s are wild cards.  An easier way to play canasta is to use the  special Piatnik Canasta set, which includes two decks of cards with markings specifically for Canasta.

Object: To form melds of three or more cards, with or without wild cards.

Play: Players form partners Each player is dealt 11 cards, and the rest of the cards are put in a pile. The top card is taken off, and placed face-up next to the pile, this is the discard pile. If it is wild or a red 3, put another on top of it.

Red 3’s are bonus cards. When a red 3 is drawn, the card is put down on the player’s side, and the player draws a replacement card. If a red 3 is taken from a discard pile, it is not replaced. To achieve the needed canasta, one must make a meld.

The initial meld points are if a player has a running total of so many points (from previous rounds), they must make a meld containing card with points totaling that many points.

Scoring: The partners points are added together. 100 points for being the one to meld out 100 for each red 3 you have, only if you made at least one meld 500 points for each natural canasta (canasta w/ no wild’s or 2’s) 300 points for each mixed canasta (canasta w/ wild’s or 2’s) The team(s) that didn’t meld out, figure the number of points they had in their hands (see above chart) and subtract it from their score Then all players figure out how many points they laid out, and add it to their score.

Ending: The team that gets 5,000 points first wins.