Out in New Mexico, where I used to reside, and in Arizona, where I currently live, men wear western boots and jeans; not all men, and not all of the time, but a lot of men, and a lot of the time.  Finding good-looking high quality western boots – or cowboy boots, as they’re still sometimes called – has never been a problem for me, as long as I’ve been willing to part with a reasonable amount of money.  Finding jeans that fit over boots has been a problem, much more than I’d ever anticipated.

This isn’t to say that there’s some sort of national shortage of boot-cut jeans out there; quite the opposite.  Levi’s Relaxed Boot 527 jeans, for instance, are available in (as best as I can tell) two styles – low-rise and not-necessarily-low-rise – and a whole bunch of colors and/or finishes, from “Electric” to “Pike” to “Treasure Cove.”  One can almost hear those old rough-and-tumble cowboys turning over in their graves every time some nice young man approaches a sales counter asking for “Treasure Cove in a low-rise.” 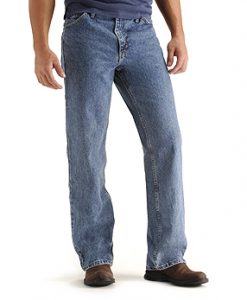 You’ll notice I wrote, “nice young man.”  There could be old codgers like myself that are nice, since anything’s possible in this world, but I doubt too many men over 40 or over 50 are looking for low-rise jeans in any color.  The best-fitting jeans I ever owned were LL Bean natural fit jeans, but these, unfortunately, were only available in a straight leg style.  It’s doubtful LL Bean would want to sell boot-cut jeans, because they want to preserve that Maine woods cachet, and not a lot of people tramp through the Maine woods in cowboy boots.  Actually, LL Bean Adirondack jeans do usually fit over western boots, and the cut is alright, but the back pocket is so shallow that my wallet came close to falling out every time I wore them.

I once bought a pair of boot-cut jeans online from Cabela’s that made my significant other howl with laughter.  The leg openings were so wide that they reminded me of an extreme form of bellbottom pants worn in the Sixties, called “Elephant Bells.”  Those jeans are now used for painting chores.

Wrangler sells Cowboy Cut jeans, which are boot-cut.  I tried on a pair of these in Wal-mart, and they seemed very stiff.  They also had only one color, a very dark indigo blue.  Having now visited Wrangler’s website, my guess is that the jeans I tried on were the (I’m quoting here), “Rigid Cowboy Cut Original Fit” jeans.  But there are also Wrangler Cowboy Cut Original Fit jeans, and these come in thirteen colors.  These are a possibility.

So . . . what are the best boot-cut jeans for men?  Right now, I’m going with Lee Men’s Regular Fit Boot Cut Jeans.  They only come in three colors – Pepperstone, Pepper Prewash, and Double Black – but that’s fine by me.  Thanks, Lee Jeans, for good-fitting jeans that actually do fit over western boots.