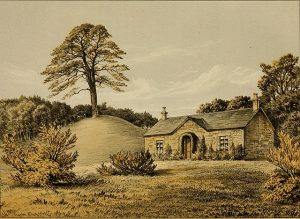 By J. A. MacCulloch

In Cormac’s Glossary and other texts, “Beltane” is derived from bel-tene, “a goodly fire,” or from bel-dine, because newly-born (dine) cattle were offered to Bel, an idol-god. The latter is followed by those who believe in a Celtic Belus, connected with Baal. No such god is known, however, and the god Belenos is in no way connected with the Semitic divinity. M. D’Arbois assumes an unknown god of death, Beltene (from beltu, “to die”), whose festival Beltane was. But Beltane was a festival of life, of the sun shining in his strength. Dr.  Stokes gives a more acceptable explanation of the word. Its primitive form was belo-te[p]nia, from belo-s, “clear,” “shining,” the root of the names Belenos and Belisama, and te[p]nos, “fire.” Thus the word would mean something like “bright fire,” perhaps the sun or the bonfire, or both.

The folk-survivals of the Beltane and Midsummer festivals show that both were intended to promote fertility.

One of the chief ritual acts at Beltane was the kindling of bonfires, often on hills. The house-fires in the district were often extinguished, the bonfire being lit by friction from a rotating wheel—the German “need-fire.” The fire kept off disease and evil, hence cattle were driven through it, or, according to Cormac, between two fires lit by Druids, in order to keep them in health during the year. Sometimes the fire was lit beneath a sacred tree, or a pole covered with greenery was surrounded by the fuel, or a tree was burned in the fire. These trees survive in the Maypole of later custom, and they represented the vegetation-spirit, to whom also the worshippers assimilated themselves by dressing in leaves. They danced sunwise round the fire or ran through the fields with blazing branches or wisps of straw, imitating the course of the sun, and thus benefiting the fields. For the same reason the tree itself was probably borne through the fields. Houses were decked with boughs and thus protected by the spirit of vegetation.

An animal representing the spirit of vegetation may have been slain. In late survivals of Beltane at Dublin, a horse’s skull and bones were thrown into the fire, the attenuated form of an earlier sacrifice or slaying of a divine victim, by whom strength was transferred to all the animals which passed through the fire. In some cases a human victim may have been slain. This is suggested by customs surviving in Perthshire in the eighteenth century, when a cake was broken up and distributed, and the person who received a certain blackened portion was called the “Beltane carline” or “devoted.” A pretence was made of throwing him into the fire, or he had to leap three times through it, and during the festival he was spoken of as “dead.” Martin says that malefactors were burned in the fire, and though he cites no authority, this agrees with the Celtic use of criminals as victims.  Perhaps the victim was at one time a human representative of the vegetation-spirit.

Beltane cakes or bannocks, perhaps made of the grain of the sacred last sheaf from the previous harvest, and therefore sacramental in character, were also used in different ways in folk-survivals. They were rolled down a slope—a magical imitative act, symbolizing and aiding the course of the sun. The cake had also a divinatory character. If it broke on reaching the foot of the slope this indicated the approaching death of its owner. In another custom in Perthshire, part of a cake was thrown over the shoulder with the words, “This I give to thee, preserve thou my horses; this to thee, preserve thou my sheep; this to thee, O fox, preserve thou my lambs; this to thee, O hooded crow; this to thee, O eagle.” Here there is an appeal to beneficial and noxious powers, whether this was the original intention of the rite. But if the cakes were made of the last sheaf, they were probably at one time eaten sacramentally, their sacrificial use emerging later.

The bonfire was a sun-charm, representing and assisting the sun.  Rain-charms were also used at Beltane. Sacred wells were visited and the ceremony performed with their waters, these perhaps being sprinkled over the tree or the fields to promote a copious rainfall for the benefit of vegetation. The use of such rites at Beltane and at other festivals may have given rise to the belief that wells were especially efficacious then for purposes of healing. The custom of rolling in the grass to benefit by May dew was probably connected with magical rites in which moisture played an important part.

The idea that the powers of growth had successfully combated those of blight may have been ritually represented. This is suggested by the mimic combats of Summer and Winter at this time, to which reference has already been made. Again, the May king and queen represent earlier personages who were regarded as embodying the spirits of vegetation and fertility at this festival, and whose marriage or union magically assisted growth and fertility, as in numerous examples of this ritual marriage elsewhere. It may be assumed that a considerable amount of sexual license also took place with the same magical purpose. Sacred marriage and festival orgy were an appeal to the forces of nature to complete their beneficial work, as well as a magical aid to them in that work.