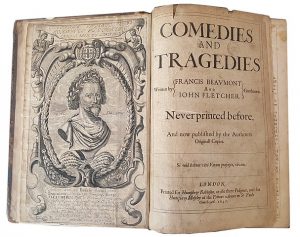 BEAUMONT, FRANCIS (1584-1616), AND FLETCHER, JOHN (1579-1625). —Poets and dramatists. As they are indissolubly associated in the history of English literature, it is convenient to treat of them in one place. Beaumont was the son of Francis Beaumont, a Judge of the Common Pleas, and was born at the family seat, Grace Dieu, Leicestershire. He was educated at Oxford, but his father dying in 1598, he left without taking his degree. He went to London and entered the Inner Temple in 1600, and soon became acquainted with Ben Jonson, Drayton, and other poets and dramatists. His first work was a translation from Ovid, followed by commendatory verses prefixed to certain plays of Jonson. Soon afterwards his friendship with Fletcher began. They lived in the same house and had practically a community of goods until Beaumont’s marriage in 1613 to Ursula, daughter and co-heiress of Henry Isley of Sundridge in Kent, by whom he had two daughters. He died in 1616, and is buried in Westminster Abbey.

Fletcher was the youngest son of Richard Fletcher, Bishop of London, who accompanied Mary Queen of Scots to the scaffold. He went to Cambridge, but it is not known whether he took a degree, though he had some reputation as a scholar. His earliest play is The Woman Hater (1607). He is said to have died of the plague, and is buried in St. Saviour’s Church, Southwark. The plays attributed to Beaumont and Fletcher number fifty-two and a masque, and much labor has been bestowed by critics in endeavoring to allocate their individual shares. It is now generally agreed that others collaborated with them to some extent—Massinger, Rowley, Shirley, and even Shakespeare. Of those believed to be the joint work of Beaumont and Fletcher Philaster and The Maid’s Tragedy are considered the masterpieces, and are as dramas unmatched except by Shakespeare. The Two Noble Kinsmen is thought to contain the work of Shakespeare. As regards their respective powers, Beaumont is held to have had the graver, solider, and more stately genius, while Fletcher excelled in brightness, wit, and gaiety. The former was the stronger in judgment, the latter in fancy. The plays contain many very beautiful lyrics, but are often stained by gross indelicacy. The play of Henry VIII. included in Shakespeare’s works, is now held to be largely the work of Fletcher and Massinger. Subjoined is a list of the plays with the authorship according to the latest authorities.