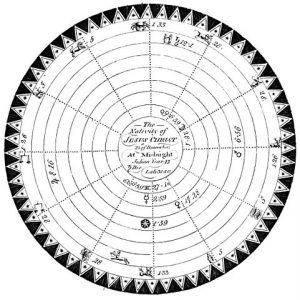 What Can One Learn From His or Her Horoscope?

In this context, we are talking about your natal chart, or birth chart, which is (just like you’d think) a chart or map of where things were in the heavens at the time of your birth.  Roughly speaking, there’s a ring of twelve star constellations circling the earth.  These twelve constellations, or signs, make up the zodiac.  When we talk about positions of the Sun, the Moon and the planets, we do so in terms of these twelve signs.  For example, if you were born on January 4th, regardless of the year, the Sun would apparently be in the sign of Capricorn. We use the term “apparently” for a number of reasons, not the least of which being that the Earth circles the Sun, and not vice versa, but the validity of geocentric versus heliocentric astrology, and the validity of tropical versus sidereal zodiacs, are issues that you can spend your free time debating much later in your progress, so don’t worry about it now.

Let’s get back to our example.  In this example, you’re a Capricorn, or – more correctly – your natal Sun is in Capricorn.  Astrologers would say that this means something, and that we expect you to have certain traits and not others based on the fact that your Sun is in Capricorn.  But it doesn’t tell us everything there is to know about you.  With everyone having a natal Sun in one of the twelve signs, roughly one-twelfth of the world’s population consists of people who have their natal Suns in the same sign as yours.  And let’s face it – you’re a lot more unique than that!

Your natal Moon was also somewhere – but where?  Here we need more information about your birth, because, while the Sun appears to take a year to go around the Earth, the moon (which really does circle the Earth) only takes about 28.5 days.  With something changing positions in the sky that fast, it isn’t really enough to know that you were born on January 4th – we also need to know the year of your birth and, preferably, the time and the place.  For most of us alive now, that information can be found on our birth certificates.

With this much information, we can have a natal chart drawn up that will pinpoint where the Sun, the Moon and all the planets were at the time of our birth.  You can buy a computer program to do this, but the simplest and best way is to get your birth chart and an interpretation of the birth chart from an astrologer.  You’ve got two options here – inexpensive and not inexpensive – and I’ll explain what they are:

On March 21st, exactly at the beginning of spring, astrologers celebrate the International Astrology Day. This day was created in 1993 to remind people that Astrology is the oldest symbolic system of western culture still alive.