The Loves of the Angels 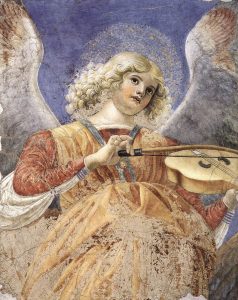 [Editor’s note: The following brief essay on angels was written by the great Irish poet Thomas Moore in 1823 as a preface to his poem, The Loves of the Angels.   Anyone with an interest in angels would surely enjoy that poem.]

The Eastern story of the angels Harut and Marut, and the Rabbinical fictions of the loves of Uzziel and Shámchazai, are the only sources to which I need refer, for the origin of the notion on which this Romance is founded.  In addition to the fitness of the subject for poetry, it struck me also as capable of affording an allegorical medium, through which might be shadowed out (as I have endeavored to do in the following stories) the fall of the Soul from its original purity – the loss of light and happiness which it suffers in the pursuit of this world’s perishable pleasures – and the punishments, both from conscience and Divine justice, with which impurity, pride, and presumptuous inquiry into the awful secrets of Heaven are sure to be visited.  The beautiful story of Cupid and Psyche owes its chief charm to this sort of “veiled meaning,” and it has been my wish (however I may have failed in the attempt) to communicate to the following pages the same moral interest.

Among the doctrines, or notions, derived by Plato from the East, one of the most natural and sublime is that which inculcates the pre-existence of the soul, and its gradual descent into this dark material world, from that region of spirit and light which it is supposed to have once inhabited, and to which, after a long lapse of purification and trial, it will return.  This belief, under various symbolical forms, may be traced through almost all the Oriental theologies.  The Chaldeans represent the Soul as originally endowed with wings, which fall away when it sinks from its native element, and must be reproduced before it can hope to return.  Some disciples of Zoroaster once inquired of him, “How the wings of the Soul might be made to grow again?” — “By sprinkling them,” he replied, “with the Waters of Life.” — “But where are those Waters to be found?” they asked.  —   “In the Garden of God,” replied Zoroaster.

The mythology of the Persians has allegorized the same doctrine, in the history of those genii of light who strayed from their dwellings in the stars, and obscured their original nature by mixture with this material sphere; while the Egyptians, connecting it with the ascent and descent of the sun in the zodiac, considered Autumn as emblematic of the Soul’s decline towards darkness, and the re-appearance of Spring as its return to light and life.

Besides the chief spirits of the Mahometan heaven, such as Gabriel, the angel of Revelation, Israfil, by whom the last trumpet is to be sounded, and Azrael, the angel of death, there were also a number of subaltern intelligences, of which tradition has preserved the names, appointed to preside over the different stages, or ascents, into which the celestial world was supposed to be divided.  Thus Kelail governs the fifth heaven; while Sadiel, the presiding spirit of the third, is also employed in steadying the motions of the earth, which would be in a constant state of agitation, if this angel did not keep his feet planted upon its orb.

Among other miraculous interpositions in favor of Mahomet, we find commemorated in the pages of the Koran the appearance of five thousand angels on his side at the battle of Bedr.

The ancient Persians supposed that Ormuzd appointed thirty angels to preside successively over the days of the month, and twelve greater ones to assume the government of the months themselves; among whom Bahman (to whom Ormuzd committed the custody of all animals, except man) was the greatest.  Mihr, the angel of the 7th month, was also the spirit that watched over the affairs of friendship and love; Chûr had the care of the disk of the sun; Mah was agent for concerns of the moon; Isphandârmaz (whom Cazvin calls the Spirit of the Earth) was the tutelar genius of good and virtuous women, &c, &c, &c.  For all this the reader may consult the 19th and 20th chapters of Hyde de Relig. Vet. Persarum, where the names and attributes of these daily and monthly angels are with much minuteness and erudition explained.  It appears, from the Zendavesta, that the Persians had a certain office or prayer for every day of the month (addressed to the particular angel who presided over it,) which they called the Sirouzé.

The Celestial Hierarchy of the Syrians, as described by Kircher, appears to be the most regularly graduated of any of these systems.  In the sphere of the Moon they placed the angels, in that of Mercury the archangels, Venus and the Sun contained the Principalities and the Powers; and so on to the summit of the planetary system, where, in the sphere of Saturn, the Thrones had their Station.  Above this was the habitation of the Cherubim in the sphere of the fixed stars; and still higher, in the region of those stars which are so distant as to be imperceptible, the Seraphim, we are told, the most perfect of all celestial creatures, dwelt.

The Sabeans also (as D’Herbelot tells us) had their classes of angels, to whom they prayed as mediators or intercessors; and the Arabians worshipped female angels, whom they called Benad Hasche, or Daughters of God.