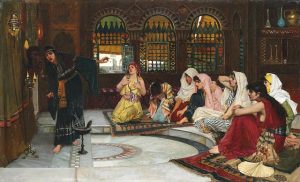 If it is true, as has been thought by many, both among the ancients and the moderns, that the oracles of pagan antiquity were only illusions and deceptions on the part of the priests and priestesses, who said that they were possessed by the spirit of Python, and filled with the inspiration of Apollo, who discovered to them internally things hidden and past, or present and future, I must not place them here in the rank of evil spirits. The devil has no other share in the matter than he has always in the crimes of men, and in that multitude of sins which cupidity, ambition, interest, and self-love produce in the world; the demon being always ready to seize an occasion to mislead us, and draw us into irregularity and error, employing all our passions to lead us into these snares. If what he has foretold is followed by fulfillment, either by chance, or because he has foreseen certain circumstances unknown to men, he takes to himself all the credit of it, and makes use of it to gain our confidence and conciliate credit for his predictions; if the thing is doubtful, and he knows not what the issue of it will be, the demon, the priest, or priestess will pronounce an equivocal oracle, in order that at all events they may appear to have spoken true.

The ancient legislators of Greece, the most skillful politicians, and generals of armies, dexterously made use of the prepossession of the people in favor of oracles, to persuade them what they had concerted was approved of by the gods, and announced by the oracle. These things and these oracles were often followed by success, not because the oracle had predicted or ordained it, but because the enterprise being well concerted and well conducted, and the soldiers also perfectly persuaded that God was on their side, fought with more than ordinary valor. Sometimes they gained over the priestess by the aid of presents, and thus disposed her to give favorable replies. Demosthenes haranguing at Athens against Philip, King of Macedon, said that the priestess of Delphi Philipized, and only pronounced oracles conformable to the inclinations, advantage, and interest of that prince.

Porphyry, the greatest enemy of the Christian name, makes no difficulty of owning that these oracles were dictated by the spirit of falsehood, and that the demons are the true authors of enchantments, philters, and spells; that they fascinate or deceive the eyes by the specters and phantoms which they cause to appear; that they ambitiously desire to pass for gods; that their aerial and spiritual bodies are nourished by the smell and smoke of the blood and fat of the animals which are immolated to them; and that the office of uttering oracles replete with falsehood, equivocation, and deceit has devolved upon them. At the head of these demons he places Hecate and Serapis. Jamblichus, another pagan author, speaks of them in the same manner, and with as much contempt.

The ancient fathers who lived so near the times when these oracles existed, several of whom had forsaken paganism and embraced Christianity, and who consequently knew more about the oracles than we can, speak of them as things invented, governed, and maintained by the demons. The most sensible among the heathens do not speak of them otherwise, but also they confess that often the malice, imposition, servility and interest of the priests had great share in the matter, and that they abused the simplicity, credulity and prepossessions of the people.

Plutarch says, that a governor of Cilicia having sent to consult the oracle of Mopsus, as he was going to Malle in the same country, the man who carried the billet fell asleep in the temple, where he saw in a dream a handsome looking man, who said to him the single word black. He carried this reply to the governor, whose mysterious question he knew nothing about. Those who heard this answer laughed at it, not knowing what was in the billet: but the governor having opened it showed them these words written in it; shall I immolate to thee a black ox or a white one? and that the oracle had thus answered his question without opening the note. But who can answer for their not having deceived the bearer of the billet in this case, as did Alexander of Abonotiche, a town of Paphlagonia, in Asia Minor. This man had the art to persuade the people of his country that he had with him the god Esculapius, in the shape of a tame serpent, who pronounced oracles, and replied to the consultations addressed to him on divers diseases without opening the billets they placed on the altar of the temple of this pretended divinity; after which, without opening them, they found the next morning the reply written below. All the trick consisted in the seal being raised artfully by a heated needle, and then replaced after having written the reply at the bottom of the note, in an obscure and enigmatical style, after the manner of other oracles. At other times he used mastic, which being yet soft, took the impression of the seal, then when that was hardened he put on another seal with the same impression. He received about ten sols (five pence) per billet, and this game lasted all his life, which was a long one; for he died at the age of seventy, being struck by lightning, near the end of the second century of the Christian era: all which may be found more at length in the book of Lucian, entitled Pseudo Manes, or the false Diviner. The priest of the oracle of Mopsus could by the same secret open the billet of the governor who consulted him, and showing himself during the night to the messenger, declared to him the above-mentioned reply.

Macrobius relates that the Emperor Trajan, to prove the oracle of Heliopolis in Phoenicia, sent him a well-sealed letter in which nothing was written; the oracle commanded that a blank letter should also be sent to the emperor. The priests of the oracle were much surprised at this, not knowing the reason of it. Another time the same emperor sent to consult this same oracle to know whether he should return safe from his expedition against the Parthians. The oracle commanded that they should send him some branches of a knotted vine, which was sacred in his temple. Neither the emperor nor any one else could guess what that meant; but his body, or rather his bones, having been brought to Rome after his death, which happened during his journey, it was supposed that the oracle had intended to predict his death, and designate his fleshless bones, which somewhat resemble the branches of a vine.

It is easy to explain this quite otherwise. If he had returned victorious, the vine being the source of wine which rejoices the heart of man, and is agreeable to both gods and men, would have typified his victory—and if the expedition had proved fruitless, the wood of the vine, which is useless for any kind of work, and only good for burning as firewood, might in that case signify the inutility of this expedition. It is allowed that the artifice, malice, and inventions of the heathen priests had much to do with the oracles; but are we to infer from this that the demon had no part in the matter?

We must allow that as by degrees the light of the Gospel was spread in the world, the reign of the demon, ignorance, corruption of morals, and crime, diminished. The priests who pretended to predict, by the inspiration of the evil spirit, things concealed from mortal knowledge, or who misled the people by their illusions and impostures, were obliged to confess that the Christians imposed silence on them, either by the empire they exercised over the devil, or else by discovering the malice and knavishness of the priests, which the people had not dared to sound, from a blind respect which they had for this mystery of iniquity.

If in our days any one would deny that in former times there were oracles which were rendered by the inspiration of the demon, we might convince him of it by what is still practiced in Lapland, and by what missionaries relate, that in India the demon reveals things hidden and to come, not by the mouth of idols, but by that of the priests, who are present when they interrogate either the statues or the demon. And they remark that there the demon becomes mute and powerless, in proportion as the light of the Gospel is spread among these nations. Thus then the silence of the oracles may be attributed—1. To a superhuman cause, which is the power of Jesus Christ, and the publication of the Gospel. 2. Mankind are become less superstitious, and bolder in searching out the cause of these pretended revelations. 3. To their having become less credulous, as Cicero says. 4. Because princes have imposed silence on the oracles, fearing that they might inspire the nation with rebellious principles. For which reason, Lucan says, that princes feared to discover the future.

Strabo conjectures that the Romans neglected them because they had the Sibylline books, and their auspices (aruspices, or haruspices), which stood them instead of oracles. M. Vandale demonstrates that some remains of the oracles might yet be seen under the Christian emperors. It was then only in process of time that oracles were entirely abolished; and it may be boldly asserted that sometimes the evil spirit revealed the future, and inspired the ministers of false gods, by permission of the Almighty, who wished to punish the confidence of the infidels in their idols. It would be going too far, if we affirmed that all that was said of the oracles was only the effect of the artifices or the malice of the priests, who always imposed on the credulity of mankind. Read on this subject the learned reply of Father Balthus to the treatises of MM. Vandale and Fontenelle.