What Is An Almanac? 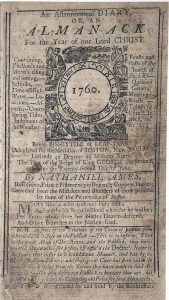 An ALMANAC is a book or table containing a calendar of the days, weeks and months of the year, a register of ecclesiastical festivals and saints’ days, and a record of various astronomical phenomena, etc. The derivation of the word is doubtful.  The word almanac was used by Roger Bacon (Opus Majus, 1267) for tables of the apparent motions of the heavenly bodies.  The Italian form is almanacco, French almanach, and the Spanish is almanaque; all of which, according to the New English Dictionary, are probably connected with the Arabic al-manakh, a combination of the definite article al, and maliakh, a word of uncertain origin.  An Arabic-Castilian vocabulary (1505) gives manakh, a calendar, and manah, a sun-dial; manakh has also been connected with the Latin manacus, a sun-dial.

The attention given to astronomy by Eastern nations probably led to the early construction of such tables as are comprised in our almanacs; of these we know little or nothing.  The fasti of the Romans are far better known and were similar to modern almanacs.  Almanacs of a rude kind, known as clogg (or clog) almanacs, consisting of square blocks of hard wood, about 8 in. in length, with notches along the four angles corresponding to the days of the year, were in use in some parts of England as late as the end of the 17th century.  Dr Robert Plot (1640-1696), keeper of the Ashmolean Museum and professor of chemistry at Oxford, describes one of these in his Natural History of Staffordshire (Oxford, 1686); and another is represented in Gough’s edition of Camden’s Britannia (1806, vol. ii. p. 499).

The earliest almanac regarding which J. J. L. de Lalande (Bibliographic astronomique, Paris, 1803) could obtain any definite information belongs to the 12th century.  Manuscript almanacs of considerable antiquity are preserved in the British Museum and in the libraries of Oxford and Cambridge.  Of these the most remarkable are a calendar ascribed to Roger Bacon (1292), and those of Peter de Dacia (about 1300), Walter de Elvendene (1327) and John Somers (1380).  It is to be remembered that early calendars (such as the Kalendarium Lincolniense of Bishop Robert Grosseteste) frequently bear the names, not of their compilers, but of the writers of the treatises on ecclesiastical computation on which the calendars are based.  The earliest English calendar in the British Museum is one for the year 1431.  The first printed almanac known was compiled by Purbach, and appeared between the years 1450 and 1461; the first of importance is that of Regiomontanus, which appears to have been printed at Nuremberg in 1472.  In this work the almanacs for the different months embrace three Metonic cycles, or the 57 years from 1475 to 1531 inclusive.  The earliest almanac printed in England was The Kalendar of Shepardes, a translation from the French, printed by Richard Pynson about 1407.

Early almanacs had commonly the name of “prognostications” in addition, and what they professed to show may be gathered from titles like the following, which is quoted by J.  O. Halliwell: “Pronostycacyon of Mayster John Thybault, medycyner and astronomer of the Emperyall Majestic, of the year of our Lorde God MCCCCCXXXIJ., comprehending the iiij.  partes of this yere, and of the influence of the mone, of peas and warre, and of the sykenesses of this yere, with the constellacions of them that be under the vij. pianettes, and the revolucions of kynges and princes, and of the eclipses and comets.” Among almanacs of this class published in England, and principally by the Stationers’ Company, are Leonard Digges’s Prognostication Everlasting of Right Good Effect, for 1553, 1555, &c.; William Lilly’s Merlinius Anglicus Junior for 1644, &c., and other almanacs and “ prognostications”; John Booker’s Bloody Almanac and Bloody Irish Almanac for 1643, 1647, &c.—the last attributed erroneously to Richard Napier; John Partridge’s Mercurius Coelestis for 1681, Merlinus Redivivus, &c. The name of Partridge has been immortalized in Pope’s Rape of the Lock; and his almanacs were very cleverly burlesqued by Swift, who predicted Partridge’s own death, in genuine prognosticator’s style.  The most famous of all the Stationers’ Company’s predicting almanacs was the Vox Stellarum of Francis Moore (1657–1715?), the first number of which was completed in July 1700, and contained predictions for 1701.  Its publication has been continued under the title of Old Moore’s Almanac.  Of a different but not a better sort was Poor Robin, dating from 1663, and published by the company down to 1828, which abounded in coarse, sometimes extremely coarse, humor.

The exclusive right to sell “almanacs and prognostications” in England, enjoyed in the time of Elizabeth by two members of the Company of Stationers, was extended by James I. to the two universities and the Stationers’ Company jointly; but the universities commuted their privilege for an annuity from the company.  This monopoly was challenged by Thomas Carnan, a bookseller, who published an almanac for three successive years, after having been thrice imprisoned on that account by the company.  The case came, in 1775, before the court of common pleas, and was decided in Carnan’s favor, the question argued being, “Whether almanacs were such public ordinances, such matters of state, as belonged to the king by his prerogative, so as to enable him to communicate an exclusive right of printing them to a grantee of the crown?” In 1779 Lord North attempted to reverse this decision by a parliamentary enactment, but the bill was thrown out.  In consequence of this the universities lost their title to their annuity, and in lieu of it they received a parliamentary grant.  The company, however, virtually retained its monopoly for many years, by buying up as much as possible all the almanacs issued by other publishers, but in more recent times this power has altogether ceased, although a considerable proportion of the almanacs published in England still issue from the hall of the Stationers’ Company.  A description of “Almanac Day” at Stationers’ Hall will be found in Knight’s Cyclopaedia of London (1851), p. 588.

On the 1st of January 1828 the Society for the Diffusion of Useful Knowledge issued the British Almanac for that year—a publication greatly superior in every way to the almanacs of the time.  The success of the British Almanac, with its valuable supplement, the Companion to the Almanac, led to a great improvement in this class of publications.  The Stationers’ Company issued the Englishman’s Almanac, a work of a similar kind.  The entire repeal in 1834, by the 3rd and 4th Will.  IV. c. 57, of the heavy stamp duty, first imposed in 1710, on all almanacs of fifteen pence per copy, gave an additional stimulus to the publication of almanacs of a better class, and from that time the number has greatly increased.  Since 1870, the British Almanac and Companion have been the principal almanacs published by the Stationers’ Company.  Whitaker’s Almanac, commenced in 1868 by Joseph Whitaker (1820-1895), is perhaps the best known of modern almanacs.

In Scotland, almanacs containing much astrological matter appeared to have been published at about the beginning of the 16th century; and about a century later those published at Aberdeen enjoyed considerable reputation.  In 1683, the Edinburgh’s True Almanack, or a New Prognostication, appeared; a publication which improved with years and was issued after 1837 as Oliver and Boyd’s New Edinburgh Almanac, a standard book of reference for Scottish affairs.  Thom’s Irish Almanac (since 1843) deals mainly with Ireland.

The earliest almanac published in the United States is probably to be ascribed to Bradford’s press in Philadelphia, for the year 1587. Poor Richard’s Almanac, 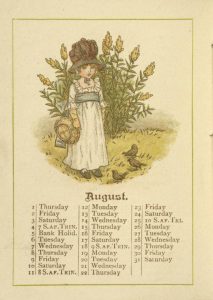 commenced in 1732 by Benjamin Franklin under the pseudonym of “Richard Saunders,” and continued by him for twenty-five years, gained a high reputation for its wise and witty sayings; it may have been suggested by a somewhat similar publication by Thomas, of Dedham, Massachusetts. The American Almanac and Repository of Useful Knowledge was published at Boston from 1828 to 1861; a continuation, The National Almanac, was published only twice, for 1863 and 1864. The Old Farmer’s Almanac enjoys considerable popularity and has been published for many years.  At the present time [1911] nearly every religious denomination, trade and newspaper have almanacs or year-books.

In France prophetic almanacs circulated very freely among the poorer and rural classes, although an ordinance of Charles IX. required the seal of a diocesan bishop on all almanacs.  In 1579 Henry III. prohibited the publication of predictions relating to political events, a prohibition renewed by Louis XIII.  Of such almanacs, the most famous was the Almanach Liegeois first published in 1625 at Liege by Matthieu Laensbergh, a person of very problematic existence.  Publications of this class subsequently increased in number to such an extent that, in 1852, their circulation was forcibly checked by the government.  The most important French almanac is the Almanach Royal, afterwards Imperial, and now National, first published in 1679.

A number of publications, issued in Germany, from the middle of the 18th to the middle of the 19th century, under such titles as Musenalmanach, modeled on the Almanach des Muses, a contemporary almanac published at Paris, contain some of the best works of some of the most celebrated German poets.  The Almaniach de Gotha, which has existed since 1763, published since 1871 both in French and German, gives a particular account of all the royal and princely families of Europe, and ample details concerning the administration and the statistics of the different states of the world.