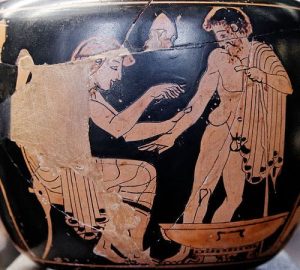 ALCMAEON, of Argos, in Greek legend, was the son of Amphiaraus and Eriphyle.  When his father set out with the expedition of the Seven against Thebes, which he knew would be fatal to him, he enjoined upon his sons to avenge his death by slaying Eriphyle and undertaking a second expedition against Thebes.  After the destruction of Thebes by the Epigoni, Alcmaeon carried out his father’s injunctions by killing his mother, as a punishment for which he was driven mad and pursued by the Erinyes from place to place.  On his arrival at Psophis in Arcadia, he was purified by its king Phegeus, whose daughter Arsinoe (or Alphesiboea) he married, making her a present of the fatal necklace and the peplus of Harmonia.  But the land was cursed with barrenness, and the oracle declared that Alcmaeon would never find rest until he reached a spot on which the sun had never shone at the time he slew his mother.  Such a spot he found at the mouth of the river Achelous, where an island had recently been formed by the alluvial deposit; here he settled and, forgetting his wife Arsinoe, married Callirrhoe, the daughter of the river-god.  His new wife longed for the necklace and peplus, and Alcmaeon, returning to Psophis, obtained possession of them, on the pretence that he desired to dedicate them at Delphi.  When the truth became known he was pursued and slain by Phegeus and his sons.  After his death Alcmaeon was worshipped at Thebes; his tomb was at Psophis in a grove of cypresses.  His story was the subject of an old epic and of several tragedies, but none of these has been preserved.