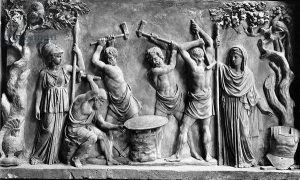 AEGIS (Gr. Aigis), in Homer, the shield or buckler of Zeus, fashioned for him by Hephaestus, furnished with tassels and bearing the Gorgon’s head in the centre.  Originally symbolical of the storm-cloud, it is probably derived from aisso, signifying rapid, violent motion.  When the god shakes it, Mount Ida is wrapped in clouds, the thunder rolls and men are smitten with fear.  He sometimes lends it to Athene and (rarely) to Apollo.  In the later story (Hyginus, Poet.  Astronom. ii. 13) Zeus is said to have used the skin of the goat Amaltheia (aigis=goat-skin) which suckled him in Crete, as a buckler when he went forth to do battle against the giants.  Another legend represents the aegis as a fire-breathing monster like the Chimaera, which was slain by Athene, who afterwards wore its skin as a cuirass (Diodorus Siculus iii. 70) It appears to have been really the goat’s skin used as a belt to support the shield.  When so used it would generally be fastened on the right shoulder, and would partially envelop the chest as it passed obliquely round in front and behind to be attached to the shield under the left arm.  Hence, by transference, it would be employed to denote at times the shield which it supported, and at other times a cuirass, the purpose of which it in part served.  In accordance with this double meaning the aegis appears in works of art sometimes as an animal’s skin thrown over the shoulders and arms, sometimes as a cuirass, with a border of snakes corresponding to the tassels of Homer, usually with the Gorgon’s head in the center.  It is often represented on the statues of Roman emperors, heroes and warriors, and on cameos and vases.