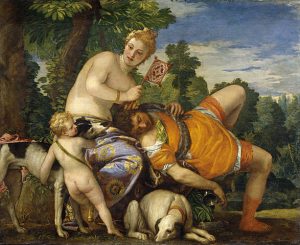 ADONIS, in classical mythology, a youth of remarkable beauty, the favorite of Aphrodite.  According to the story in Apollodorus (iii. 14. 4), he was the son of the Syrian king Theias by his daughter Smyrna (Myrrha), who had been inspired by Aphrodite with unnatural love.  When Theias discovered the truth he would have slain his daughter, but the gods in pity changed her into a tree of the same name.  After ten months the tree burst asunder and from it came forth Adonis.  Aphrodite, charmed by his beauty, hid the infant in a box and handed him over to the care of Persephone, who afterwards refused to give him up.  On an appeal being made to Zeus, he decided that Adonis should spend a third of the year with Persephone and a third with Aphrodite, the remaining third being at his own disposal.  Adonis was afterwards killed by a boar sent by Artemis.  There are many variations in the later forms of the story (notably in Ovid, Metam. x. 298).  The name is generally supposed to be of Phoenician origin (from adon–“lord”), Adonis himself being identified with Tammuz (but see F.  Dummler in Pauly-Wissowa’s Realencyklopadie, who does not admit a Semitic origin for either name or cult).  The name Abobas, by which he was known at Perga in Pamphyha, certainly seems connected with abub (a Semitic word for “flute”; cf.  “ambubaiarum collegia” in Horace, Satires, i. 2. 1). Annual festivals, called Adonia, were held in his honor at Byblus, Alexandria, Athens and other places.  Although there were variations in the ceremony itself and in its date, the central idea was the death and resurrection of Adonis.  A vivid description of the festival at Alexandria (for which Bion probably wrote his Dirge cf. Adonis) is given by Theocritus in his fifteenth idyll, the Adoniazusae.  On the first day, which celebrated the union of Adonis and Aphrodite, their images were placed side by side on a silver couch, around them all the fruits of the season, “Adonis gardens” in silver baskets, golden boxes of myrrh, cakes of meal, honey and oil, made in the likeness of things that creep and things that fly.  On the day following the image of Adonis was carried down to the shore and cast into the sea by women with disheveled hair and bared breasts.  At the same time a song was sung, in which the god was entreated to be propitious in the coming year.  This festival, like that at Athens, was held late in summer; at Byblus, where the mourning . ceremony preceded, it took place in spring.

It is now generally agreed that Adonis is a vegetation spirit, whose death and return to life represent the decay of nature in winter and its revival in spring.  He is born from the myrrh-tree, the oil of which is used at his festival; he is connected with Aphrodite in her character of vegetation-goddess.  A special feature of the Athenian festival was the “Adonis gardens,” small pots of flowers forced to grow artificially, which rapidly faded (hence the expression was used to denote any transitory pleasure).  The dispute between Aphrodite and Persephone for the possession of Adonis, settled by the agreement that he is to spend a third (or half) of the year in the lower-world (the seed at first underground and then reappearing above it), finds a parallel in the story of Tammuz and Ishtar. The ceremony of the Adonia was intended as a charm to promote the growth of vegetation, the throwing of the gardens and images into the water being supposed to procure a supply of rain (for European parallels see Mannhardt).  It is suggested (Frazer) that Adonis is not a god of vegetation generally, but specially a corn-spirit, and that the lamentation is not for the decay of vegetation in winter, but for the cruel treatment of the corn by the reaper and miller (cf. Robert Burns’s John Barleycorn.)

All important element in the story is the connection of Adonis with the boar, which (according to one version) brings him into the world by splitting with his tusk the bark of the tree into which Smyrna was changed, and finally kills him.  It is probable that Adonis himself was looked upon as incarnate in the swine, so that the sacrifice to him by way of expiation on special occasions of an animal which otherwise was specially sacred, and its consumption by its worshippers, was a sacramental act.  Other instances of a god being sacrificed to himself as his own enemy are the sacrifice of the goat and bull to Dionysus and of the bear to Artemis.  The swine would be sacrificed as having caused the death of Adonis, which explains the dislike of Aphrodite for that animal.  It has been observed that whenever swine sacrifices occur in the ritual of Aphrodite there is reference to Adonis.  In any vase, the conception of Adonis as a swine-god does not contradict the idea of him as a vegetation or corn spirit, which in many parts of Europe appears in the form of a boar or sow.