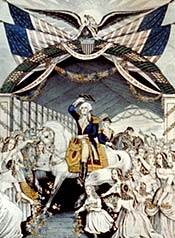 The more refined forms of literature also began to receive intelligent attention towards the close of the period.  The Revolution in passing struck out some sparks of balladry and song, but the inspiration of the spirit of nationality was first felt in poetry by Philip Freneau (1752-1832), whose Poems (1786) marked the best political achievement up to his time.  Patriotism was also a ruling motive in the works of the three poets associated with Yale College, John Trumbull (1750-1831), Timothy Dwight (1752-1817), and Joel Barlow (1754-1812), authors respectively of McFingal (1782), a Hudibrastic satire of the Revolution, The Conquest of Canaan (1785), an epic, and The Vision of Columbus (1787), later remade into The Columbiad, also an epic.  These poets gathered about them a less talented company, and all were denominated in common the “Hartford Wits,” by which name rather than by their works they are remembered.

The national hymn, “Hail Columbia,” was composed by Joseph Hopkinson (1770-1842) in 1798.  Fiction, in turn, was first cultivated by Charles Brockden Brown (1771-1810), a Philadelphian, who wrote six romantic novels (1798-1801) after the style of Godwin, but set in the conditions of the new world and mixing local description and observation with the material of mystery and terror.

Fiction had been earlier attempted by Mrs Susanna Haswell Rowson, whose Charlotte Temple (1790) is remembered, and contemporaneously by Mrs Hannah Webster Foster in The Coquette (1797) and by Royall Tyler (1758-1826) in The Algerian Captive (1799); but to Brown properly belongs the title of the first American novelist, nor are his works without invention and intensity and a certain distinction that secure for them permanent remembrance.

The drama formally began its career on a regular stage and with an established company, in 1786 at New York, with the acting of Royall Tyler’s comedy The Contrast; but the earliest American play was Thomas Godfrey’s (1736-1763) tragedy, The Prince of Parthia, acted in Philadelphia in 1767.  William Dunlap (1766-1839) is, however, credited with being the father of the American theatre on the New York stage, where his plays were produced.  One other earlier book deserves mention, John Woolman’s (1720-1772) Journal (1775), a Quaker autobiography with much charm.  With these various attempts the 18th century was brought to an end.  In 200 years no literary classic had been produced in America.