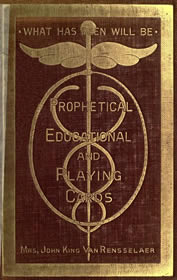 If an apology is needed for writing again on the subject of playing cards, the excuse may be offered that new lights have been turned on the subject, so that there is fresh information to lay before the public, derived from a close and exhaustive study of the European libraries and museums, as well as of the pictures on the Playing Cards themselves or prints found in those repositories, and also in the collection owned by the writer; for these speak their histories to those who regard their symbols with appreciative knowledge, since they had an immense significance when originally adopted.

It is twenty years since The Devil’s Picture Book was published and it is now out of print. The writer has been frequently called upon to furnish papers on the subject, so that it has been kept fresh in mind. At the time that the first book was issued it was the only one that had been printed in the United States devoted entirely to the history of cards not necessarily connected with games. Since then little has been published on the subject, and the information given in the present volume has been largely derived from the writer’s own observations and studies.

A collection of Playing Cards, begun at that time with a solitary pack brought as a curiosity by a traveler from Algiers, that bore the ancient pips of Swords, Staves, Money and Cups, has now grown to hundreds of specimens culled from many different countries. Comparing these with each other, and studying all obtainable histories on the subject, leads to the conclusion that the writers of the seventeenth, eighteenth and nineteenth centuries were correct when they stated that no historical record existed before the middle of the fourteenth century of games played with cards. But each and all of the writers on Playing Cards agree that there were cards and that they seem to have been used for fortune-telling before 1350, and also that there was a baffling resemblance between the traditions of the cards and what was recorded of the Egyptian mysteries connected with the worship of Thoth Hermes.

It therefore followed that the history and traditions peculiar to the ceremonies connected with that personage should be studied in order to trace Playing Cards to their birthplace and find for them an origin, without weakly stopping at the fourteenth century, and declaring that cards came out of space, as many authors have done.

The heraldic devices of Mercury, which are the emblems of what has always been called, by historians, “The Book of Thoth Hermes Trismegistus,” are in themselves mute proof of the connection of the Tarots (as they are now called) with the cult of Mercury. These cards are the oldest ones known, and the symbols are retained in Italian Tarots of to-day, so it may be allowed that when Playing Cards are studied as the leaves of the book of a cult, not as a game, their own pictures relate the story that has lain dormant for many hundreds of years. They only required to have a key in order to be intelligible to any one interested in the subject, and this has been furnished by recognizing the four attributes of Mercury in the card pips, which had escaped the notice of students until the present time, as well as the attributes of the picture part of the pack called the Atouts, which are those of Egyptian gods.

The popular notion that cards were invented for the amusement of a crazy French king is quite disproved by the historical records of the Tarots of the fourteenth century and the packs that survive. There are some beautiful specimens in Mr. Pierpont Morgan’s collection, the emblems and devices of which are identical with records of the ancient Tarots, and these cards are very much older than the French packs.

Although the gap between the old cards and the worship of Mercury in Etruria is still to be bridged through accurate historical data, the inferential connection is too strong to be ignored and the rules of the games played with the cards intended for prophesying or fortune-telling, as well as the tradition connected with the Tarots themselves offer connecting links with the cult of Mercury that cannot afford to be disregarded, as has been done hitherto.

Mr. Stuart Culin, in his introduction to “Korean Games,” says: “Investigation has been hitherto comparatively unproductive of results from the fact that most students have failed to perceive the true significance of games in primitive culture, regarding them primarily as pastimes.” But he traces many of the games which are common to all children all over the world to a “sacred and divinatory origin, a theory that finds confirmation in their traditional associations, such as the use of cards in fortune-telling.”

That Playing Cards are derived from the mysteries of ancient days will prove to be such a novel idea to many persons that the well-worn expression: “It can’t be true, I never heard it before,” will be hurled at the author. But such critics are begged to pause, to consider the subject carefully, and to marshal convincing proofs to the contrary before dipping caustic-tipped pens into the inkwells of ignorance, doubt and disbelief.

Court de Gebelin, over a hundred years ago, was scoffed at and called a dreamer by the writers who followed him and wrote on the subject of Playing Cards; yet these same gentlemen with strange accord, while failing to advance any proofs of de Gebelin’s inconsistencies or ignorant deductions, contradicted themselves by agreeing with his bold statement that the Tarots were the survival of the cult of Mercury or Thoth Hermes.

The nineteen-hundred-year-old crusade against cards, as wicked tools of wicked persons, dates from the struggle of the early Christians against idolatry, and this has been transmitted for generations, although there are few persons who can trace their prejudices to the true origin. Nor do they realize how often Divine commands to consult the occult were laid upon the Israelites without carefully perusing the books of Moses.

It may be as well to sum up in a few words the various proofs that the Playing Cards we now use are descended from the ancient mysteries. First, Arrows, and their successors, Straws, Sceptres or Rods. Cups, Swords and Money have always been used in connection with prophesying. Second, the emblems of Swords, Sceptres (or Stylus), Cups and Money have always represented Mercury, Thoth and Nebo as their emblems or attributes. Third, the worship of Thoth was introduced into Italy by the priests of that cult, as is proved historically by the remains of their Temple at Puozzoli, as well as the Temple there to Mercury, near which place the Tarots are still found in common use in their original form, displaying pictures of the Egyptian deities. Fourth, the Egyptians or Gypsies are the fortune-tellers of Europe and always use cards for the purpose. Fifth, the name given originally to the Tarots or prophetical cards that bear the ancient emblems was Nabi, Naypes or “Prophets,” which name is retained for playing cards in many parts of the world.

Thanks are due to the custodians of various museums who have displayed their collection of cards, and in particular to the artist, Mr. Burton Donnel Hughes, who kindly and skillfully designed the beautifully symbolic cover for this book.