When you are deciding to purchase a classical music CD, what do you look for?  The music being performed, certainly.  The performer, usually.  And what about the label?

The label on a classical recording is as important as the label on a bottle of wine, and just as important.  It gives a quick indication of quality and of price, and may include other information as well.  The label L'Oiseau-Lyre, for example, only offers recordings of music played on period instruments.

I've listed a number of classical music labels below, in alphabetical order, with brief comments.  Criticisms are bound to be general, but should prove somewhat helpful.  I've also included examples of a few of the label's recordings; these represent a few of the label's CD's that I can personally recommend.  Please feel free to share your thoughts with me on this subject.

BIS.  Stephen Hough has recorded on BIS - what more can one ask for?

Delos.  My personal experience with Delos recordings has generally been disappointing.  Carol Rosenberger's Night Moods can serve as an example.  The recording succeeds in converting works by Chopin, Liszt and others into lifeless background piano music - no mean feat, I grant you, but also no praiseworthy accomplishment.  On the other hand, I've not listened to Delos recordings in a long time, so my advice is, simply, that one should experiment on one's own.  And I do like the Chamber Music Society of Lincoln Center very much!

Disques Pierre Verany.  You may never run across this French label, but feel confident that it is a good one.

Dorian Recordings.  Dorian is based, surprisingly, in Troy, New York.  Nicknamed "The Collar City," Troy, along with neighboring Schenectady ("The Electric City") and Albany ("The Dismal City"), boasts little in the way of cultural endeavors, so one must think well of the Dorian people for setting up shop there.  Their recordings run the gamut from odd to oddly worthwhile.  Quirky, one might say.

Ermitage.  Manufactured in Bologna, Italy.  Classic performances, like Wilhelm Backhaus performing Beethoven's Piano Concerto No. 5 with Carl Schuricht conducting the RTSI Orchestra.  On this particular CD, the liner notes in English make sense, and are appropriate - a nostalgic remembrance of hearing Backhaus perform the "Emperor" Concerto by Piero Rattalino.  Oddly (and with no logical reason that I can detect), an excerpt from this remembrance also comprises the liner notes for a different Ermitage CD featuring Clara Haskil and Arthur Grumiaux performing works by Beethoven and Mozart.  Putting the matter simply, Ermitage's packaging for English-speaking audiences needs work.

L'Oiseau-Lyre.  This is, I believe, a Decca label.  According to them, "The L'Oiseau-Lyre series presents performances of music from the Medieval to the Romantic periods on original instruments or authentic copies, based on the most recent research into the original texts, instrumentation and performing styles of each period."  Christopher Hogwood, conducting The Academy of Ancient Music, has appeared on this label. 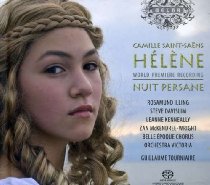 Melba.  I was unaware of this Australian label but Dennis, a reader, was kind enough to bring it to my attention.  In his words, "There’s a small label here called 'Melba Recordings' which I think should be added to your list. A small catalogue but with some outstanding recordings, including the Ring which Gramophone reviewed & called 'the best sounding Ring bar none'. Apart from brilliant sound, there’s a lot of unique repertoire."  Right he is, and lovers of classical rarities done well should investigate.  A few examples are listed below:

Musical Heritage Society.  The Musical Heritage Society is what we called, in the good old days, a "record club."  That probably doesn't sound encouraging, but their recordings are fine now, and occasionally really excellent.  Packaging artwork can sometimes be poor, but liner notes are usually informative. Note that thier CDs have little in the way of collectability, similar to book club editions.

Naxos.  Naxos started out as a budget label - don't let that deter you.  They have a huge catalogue, and the quality of their recordings is usually very good. You won't often find high-profile performers on Naxos, but you will find a great number of worthwhile works, some of which are difficult to find elsewhere.

Sony Classical.  High quality - a respected name.  Big name artists, and there's something to be said for that.