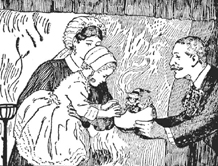 [This is taken from Yuletide in Many Lands by Mary P. Pringle.]

"I hear along our street
Pass the minstrel throngs;
Hark! they play so sweet,
On their hautboys, Christmas songs!"
— Carol

One would naturally imagine that such a pleasure-loving people as the French would make much of Christmas, but instead of this we find that with them, excepting in a few provinces and places remote from cities, it is the least observed of all the holidays.

It was once a very gay season, but now Paris scarcely recognizes the day excepting in churches. The shops, as in most large cities, display elegant goods, pretty toys, a great variety of sweetmeats, and tastefully trimmed Christmas trees, for that wonderful tree is fast spreading over Europe, especially wherever the Anglo-Saxon and Teutonic races have settled.

Confectioners offer a tempting supply of naulets—little delicate cakes—with a sugar figure of Christ on top, pretty boxes made of chocolate containing candy in the form of fruits, vegetables, musical instruments, and even boots and shoes, and all manner of quaint, artistic sugared devices, to be used as gifts or table decorations.

Early in December, wooden booths and open-air stands are erected throughout the shopping districts for the sale of Christmas goods. At night they are lighted, and through the day and evening they are gay with shoppers. Many of the booths contain evergreens and fresh green boughs for making the arbre de Nau. This is a hoop tied with bunches of green, interspersed with rosy apples, nuts, and highly colored, gaily ornamented eggshells that have been carefully blown for the purpose. The hoops are hung in sitting-rooms or kitchens, but are used more in the country than in the cities.

Although the cities are filled with Yule-tide shoppers and lovely wares, in order to enjoy a veritable Merry Christmas one must seek some retired town and if possible gain access to a home of ancient date, where the family keep the customs of their ancestors. There he will find the day devoutly and solemnly observed, and legend and superstitions concerning every observance of the day. He will find that great anxiety is evinced regarding the weather during the twelve days preceding Christmas, as that portends the state of the weather for the ensuing twelve months.

He will notice that unlike the Yule-logs of other countries, those of France are not to be sat on, for if by any chance a person sits on a Yule-log he will experience such pain as will prevent his partaking of the Christmas dinner. He will also find that the log has benevolent powers, and if his shoe is left beside it during the night it will be filled with peppermints or candy. The ashes of the log are believed to be a protection against lightning and bad luck, so some will be stored away beneath the bed of the master of the house as a means of procuring good-fortune and other blessings during the coming year, and if he chance to fall sick, some of the ashes will probably be infused into his medicine and given to him.

If the log, the cosse de Nau, is of oak and felled at midnight, it is supposed to be much more efficacious, therefore all who can do so procure an oaken log, at least. In some families where the Yule-log is lighted, it is the custom to have it brought into the room by the oldest and youngest members of the family. The oldest member is expected to pour three libations of wine upon the log while voicing an invocation in behalf of wealth, health, and general good-fortune for the household, after which the youngest member, be he a few days or a few months old, drinks to the newly lighted fire,—the emblem of the new light of another year. Each member present follows the example set by the youngest, and drinks to the new light.

Yule-tide in France begins on St. Barbar's Day, December fourth, when it is customary to plant grain in little dishes of earth for this saint's use as a means of informing her devotees what manner of crops to expect during the forthcoming year. If the grain comes up and is flourishing at Christmas, the crops will be abundant. Each dish of fresh, green grain is used for a centerpiece on the dinner-table.

For several days previous to Christmas, children go into the woods and fields to gather laurel, holly, bright berries, and pretty lichens with which to build the crèche, their tribute in commemoration of the birth of Christ. It is a representation of the Holy Manger, which the little folks build on a table in the corner of the living-room. With bits of stones they form a hill, partly covering the rocky surface with green and sometimes sprinkling it with flour to produce the effect of snow. On and about the hill they arrange tiny figures of men and beasts, and above the summit they suspend a bright star, a white dove, or a gilded figure of Jehovah. 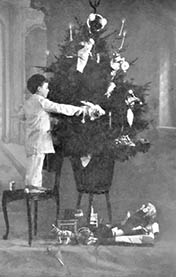 After the ceremony of lighting the Yule-log on Christmas Eve, the children light up the crèche with small candles, often tri-colored in honor of the Trinity. Throughout the work of gathering the material and making and lighting the crèche, they sing carols in praise of the Little Jesus. In fact young and old accompany their Yule-tide labors with carols, such as their parents and grandparents sang before them,—the famous Noëls of the country.

The children continue to light their crèche each night until Epiphany, the family gathering around and joining in singing one or more of the well-known Noëls, for

"Shepherds at the grange,
Where the Babe was born,
Sang, with many a change,
Christmas carols until morn.
Let us by the fire
Ever higher
Sing them till the night expires."

On the eve of Epiphany the children all march forth to meet the Magi, who are yearly expected, but who yearly disappoint the waiting ones.

The custom of hanging sheaves of wheat to the eaves of the houses for the birds' Christmas, so commonly observed throughout the cooler countries, is also observed by the children of France, and the animals are given especial care and attention at this joyous season. Each house-cat is given all it can eat on Christmas Eve for if, by any chance, it mews, bad luck is sure to follow. Of course a great deal is done for the poorer class at Christmas; food, clothing, and useful gifts are liberally bestowed, and so far as it is possible, the season is one of good will and good cheer for all.

If the French still hold to many of the Christmas customs bequeathed them by their Aryan ancestors, New Year's Day shows the influence of their Roman conquerors, for a combination of Northern and Southern customs is noticeable on that occasion. Each public official takes his seat of office on that day, after the manner of the Romans. Family feasting, exchanging of gifts among friends, and merrymaking are features of New Year's Day rather than of Christmas in France, although children delight in placing their sabots, or shoes, on the hearth for the Christ-child to fill with gifts on Christmas Eve.

In early times New Year's Day was the occasion of the Festival of Fools, when the wildest hilarity prevailed, and for upward of two hundred and forty years that custom continued in favor. Now Christmas is essentially the church festival; New Year's Day is the social festival, and Epiphany is the oldest festival observed during Yule-tide in France.

The latter festival is derived from the Roman Saturnalia, the main feature of the celebration being lawlessness and wild fun. Many of the features of former times are no longer in vogue, but the Twelfth-Night supper still continues in favor, when songs, toasts, and a general good time finishes the holiday season.

December is really the month of song in France. From the first to the last every one who can utter a sound is singing, singing, singing. Strolling musicians go from house to house playing and singing Noëls, and old and young of all classes in society, at home and abroad, on their way to church or to market, at work or at play, may be heard singing these fascinating carols.

Noël signifies "good news," and it has been the greeting of the season since the earliest observance of Christmas. The word is on every tongue; salutations, invocations, and songs begin and end with it. Carols peculiarly adapted to the day or season in time came to be known as Noëls, and these songs are to be heard everywhere in France during the holidays of Yuletide.

"Our Psalm of joy to God ascending
Filleth our souls with Holy fame.
This day the Saviour Child was born,
Dark was the night that now is ending,
But on the dawn were angels tending.
Hail! Christmas, Hail! Christmas morn.

"In faith we see thee, Virgin Mother,
Still clasp thy Son, and in His eyes
Seek Heaven's own light that in them lies.
Though narrow shed His might confineth,
Though low in manger He reclineth,
Bright on His brow a glory shineth.

"Oh, Saviour King! Hear when we call Thee,
Oh, Lord of Angels, glorious the song,
The song Thy ransom'd people raise,
Would that our hearts from sin and sorrow
And earthly bondage now might sever.
With Thee, Lord, reign forever and ever."