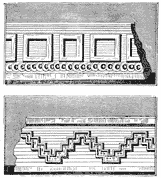 If, as seems most likely, there was in South America an ancient development of civilized human life, out of which arose the civilizations found in Peru and Central America, its antiquity was much greater than can be comprehended by the current chronologies. This, however, can not make it improbable, for these chronologies are really no more reasonable than the monkish fancies used in the sixteenth and seventeenth centuries to explain these civilizations. We find the hagiologists very absurd, but the condition of mind which made them possible is closely akin to that which moves some men in our time to deny or limit the past, and reject the results of any investigation which tend to enlarge it. Rational inquiry constantly forces upon us the suggestion that there was more in the unwritten history of the human race than our inherited modes of thinking have allowed us to suppose, and that the beginning of civilization is far more ancient than our long accepted theories of antiquity are able to admit.

What may be discovered in South America by a more complete geological and paleontological investigation it is not now possible to say. Professor Orton, in his recent book, “The Andes and the Amazon,” far exceeds Montesinos in his estimate of the antiquity of Peruvian civilization. He says on this point:

“Geology and archeology are combining to prove that Sorato and Chimborazo have looked down upon a civilization far more ancient than that of the Incas, and perhaps coeval with the flint-flakes of Cornwall and the shell-mounds of Denmark. On the shores of Lake Titicaca are extensive ruins which antedate the advent of Manco-Capac, and may be as venerable as the lake-dwellings of Geneva. Wilson has traced six terraces in going up from the sea through the province of Esmeraldas toward Quito, and underneath the living forest, which is older than the Spanish invasion, many gold, copper, and stone vestiges of a lost population were found. In all cases these relics are situated below the high-tide mark, in a bed of marine sediment, from which he infers that this part of the country formerly stood higher above the sea. If this be true, vast must be the antiquity of these remains, for the upheaval and subsidence of the coast is exceedingly slow.”

This refers to discoveries made on the coast of Ecuador in 1860, by James S. Wilson, Esq. At various points along this coast he found “ancient or fossil pottery, vessels, images,” and other manufactured articles, all finely wrought. Some of these articles were made of gold. The most remarkable fact connected with them is that they were taken from “a stratum of ancient surface earth” which was covered with a marine deposit six feet thick. The geological formation where these remains were found is reported to be “as old as the drift strata of Europe,” and “identical with that of Guayaquil in which bones of the mastodon are met with.” The ancient surface earth or vegetable mould, with its pottery, gold-work, and other relics of civilized human life, was, therefore, below the sea when that marine deposit was spread over it. This land, after being occupied by men, had subsided and settled below the ocean, remained there long enough to accumulate the marine deposit, and again been elevated to its former position above the sea level. Since this elevation, forests have been established over it which are older than the Spanish Conquest, and now it is once more subsiding. In 1862, at a meeting of the Royal Geological Society, Sir Roderick Murchison spoke of these discoveries as follows:

“The discoveries Mr. Wilson has made of the existence of the works of man in a stratum of mould beneath the sea level, and covered by several feet of clay, the phenomenon being persistent for sixty miles, are of the highest interest to physical geographers and geologists. The facts seem to demonstrate that, within the human period, the lands on the west coast of Equatorial America were depressed and submerged, and that after the accumulation of marine clays above the terrestrial relics the whole coast was elevated to its present position.”

Assuming the facts to be as Mr. Wilson reports (and they have not been called in question), it follows that there was human civilization to a certain extent in South America at the time of the older stone age of Western Europe. The oldest Peruvian date of Montesinos is quite modern compared with this. The fact may be considered in connection with another mentioned in the section on American Ethnology, namely, that the most ancient fauna on this continent, man probably included, is that of South America. But, without regard to what may be signified by these discoveries of Mr. Wilson, there is good reason for believing that the Peruvian civilization was much more ancient than it has been the fashion to admit.

Peru would now be a very different country if the Spaniards had been sufficiently controlled by Christianity and civilization to treat the Peruvians justly, and seek nothing more than friendly intercourse with them. But they went there as greedy buccaneers, unscrupulous robbers, and brought every thing to ruin. At no time since the Spanish Conquest has the country been as orderly, as prosperous, or as populous as they found it. It has fallen to a much lower condition. Industry and thrift have been supplanted by laziness and beggarly poverty. Ignorance and incapacity have taken the place of that intelligence and enterprise which enabled the old Peruvians to maintain their remarkable system of agriculture, complete their great works, and made them so industrious and skillful in their manufactures. The region covered by the Peruvian empire has not half as many people now as it had in the time of the Incas. Is it possible to imagine the present inhabitants of Ecuador, Peru, and Bolivia cultivating their soil with intelligent industry, building aqueducts five hundred miles long, and constructing magnificently paved roads through the rocks and across the ravines of the Andes, from Quito to Chili? One of the scholars connected with the scientific expedition which visited South America in 1867, describing the ancient greatness and present inferior condition of Quito, exclaims, “May the future bring it days equal to those when it was called the ‘City of the Incas!’” He might appropriately utter a similar wish for the whole country.