"The Oldest of Civilizations" 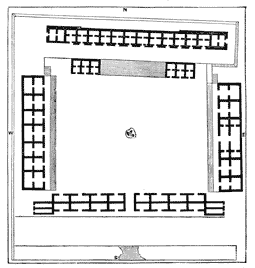 Some investigators, who have given much study to the antiquities, traditions, old books, and probable geological history of Mexico and Central America, believe that the first civilization the world ever saw appeared in this part of Ancient America, or was immediately connected with it. They hold that the human race first rose to civilized life in America, which is, geologically, the oldest of the continents; and that, ages ago, the portion of this continent on which the first civilizers appeared was sunk beneath the waters of the Atlantic Ocean. Usually the engulfing of this portion of the land is supposed to have been effected by some tremendous convulsion of nature; and there is appeal to recollections of such a catastrophe, said to have been preserved in the old books of Central America, and also in those of Egypt, from which Solon received an account of the lost Atlantis.

According to this hypothesis, the American continent formerly extended from Mexico, Central America, and New Granada far into the Atlantic Ocean toward Europe and Africa, covering all the space now occupied by the Caribbean Sea, the Gulf of Mexico, and the West India islands, and going far beyond them toward the east and northeast. This lost portion of the continent was the Atlantis of which the old annals of Egypt told so much in the time of Solon, as we learn from Plato; and it was the original seat of the first human civilization, which, after the great cataclysm, was renewed and perpetuated in the region where we now trace the mysterious remains of ancient cities. Those desiring to know what can be said in support of this view of Ancient America must read the later volumes of Brasseur de Bourbourg, especially his “Quatre Lettres sur le Mexique,” and his “Sources de l’Histoire Primitive du Mexique,” etc. He is not a perspicuous writer; he uses but little system in treating the subject, and he introduces many fanciful speculations which do more to embarrass than to help the discussion; but those who read the books patiently can find and bring together all that relates to the point in question, and consider it in their own way. They can also find it set forth and defended in a small volume by George Catlin, entitled “The Lifted and Subsided Rocks of America,” published in London, not long since, by Trübner and Company.

I shall give more attention to this theory in the next chapter. I refer to it here on account of the very great antiquity it claims for the ancient American civilization. It represents that the advanced human development whose crumbling monuments are studied at Copan, Mitla, and Palenque antedates every thing else in the human period of our globe, excepting, perhaps, an earlier time of barbarism and pastoral simplicity; that its history goes back through all the misty ages of pre-historic time to an unknown date previous to the beginning of such civilization in any part of the Old World. It is hardly possible to make it more ancient.