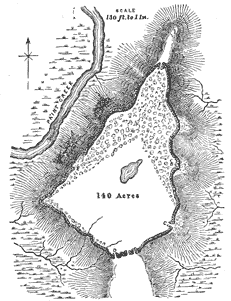 It is usual to rank the civilized life of the Mound-Builders much below that of the ancient people of Mexico and Central America. This may be correct, for the remains as they now exist appear to justify it. But if all the ancient stone-work in Central America, with its finely-carved inscriptions and wonderful decorations, had disappeared in the ages before Europeans visited this continent, the difference might not appear to be so great; for then the Central American remains, consisting only of earth-works, truncated pyramids, pyramidal foundations, and their connected works made of earth, would have a closer resemblance to works of the Mound-Builders, to those especially found on the lower Mississippi. On the other hand, if we now had in the Ohio and Mississippi Valleys remains of the more important edifices anciently constructed there, the Mound-Builders might be placed considerably higher in the scale of civilization than it has been customary to allow.

It can be seen, without long study of their works as we know them, that the Mound-Builders had a certain degree of civilization which raised them far above the condition of savages. To make such works possible under any circumstances, there must be settled life, with its accumulations and intelligently organized industry. Fixed habits of useful work, directed by intelligence, are what barbarous tribes lack most of all. A profound change in this respect is indispensable to the beginning of civilization in such tribes.

No savage tribe found here by Europeans could have undertaken such constructions as those of the Mound-Builders. The wild Indians found in North America lived rudely in tribes. They had only such organization as was required by their nomadic habits, and their methods of hunting and fighting. These barbarous Indians gave no sign of being capable of the systematic application to useful industry which promotes intelligence, elevates the condition of life, accumulates wealth, and undertakes great works. This condition of industry, of which the worn and decayed works of the Mound-Builders are unmistakable monuments, means civilization.

Albert Gallatin, who gave considerable attention to their remains, thought their works indicated not only “a dense agricultural population,” but also a state of society essentially different from that of the Iroquois and Algonquin Indians. He was sure that the people who established such settlements and built such works must have been “eminently agricultural.” No trace of their ordinary dwellings is left. These must have been constructed of perishable materials, which went to dust long before great forests had again covered most of the regions through which they were scattered. Doubtless their dwellings and other edifices were made of wood, and they must have been numerous. It is abundantly evident that there were large towns at such places as Newark, Circleville, and Marietta, in Ohio.

Their agricultural products may have been similar to many of those found in Mexico; and it is not improbable that the barbarous Indians, who afterward occupied the country, learned from them the cultivation of maize. Their unity as a people, which is every where so manifest, must have been expressed in political organization, else it could not have been maintained.

In the details of their works, and in manufactured articles taken from the mounds, there is evidence of considerable civilization. For instance, it has been ascertained that the circular enclosures are perfect circles, and the square enclosures perfect squares. They were constructed with a geometrical precision which implies a kind of knowledge in the builders that may be called scientific. Relics of art have been dug from some of the mounds, consisting of a considerable variety of ornaments and implements, made of copper, silver, obsidian, porphyry, and greenstone, finely wrought. There are axes, single and double; adzes, chisels, drills or gravers, lance-heads, knives, bracelets, pendants, beads, and the like, made of copper. There are articles of pottery, elegantly designed and finished; ornaments made of silver, bone, mica from the Alleghenies, and shells from the Gulf of Mexico.

The articles made of stone show fine workmanship; some of them are elaborately carved. Tools of some very hard material must have been required to work the porphyry in this manner. Obsidian is a volcanic product largely used by the ancient Mexicans and Peruvians for arms and cutting instruments. It is found in its natural state nowhere nearer the Mississippi Valley than the Mexican mountains of Cerro Gordo.

There appears to be evidence that the Mound-Builders had the art of spinning and weaving, for cloth has been found among their remains. At the meeting of the International Congress of Pre-Historic Archeology held at Norwich, England, in 1868, one of the speakers stated this fact as follows: “Fragments of charred cloth made of spun fibers have been found in the mounds. A specimen of such cloth, taken from a mound in Butler County, Ohio, is in Blackmore Museum, Salisbury. In the same collection are several lumps of burnt clay which formed part of the ‘altar,’ so called, in a mound in Ross County, Ohio: to this clay a few charred threads are still attached.”

Mr. Schoolcraft gives this account of a discovery made in West Virginia: “Antique tube: telescopic device. In the course of excavations made in 1842 in the easternmost of the three mounds of the Elizabethtown group, several tubes of stone were disclosed, the precise object of which has been the subject of various opinions. The longest measured twelve inches, the shortest eight. Three of them were carved out of steatite, being skillfully cut and polished. The diameter of the tube externally was one inch and four tenths; the bore, eight tenths of an inch. This caliber was continued till within three eighths of an inch of the sight end, when it diminishes to two tenths of an inch. By placing the eye at the diminished end, the extraneous light is shut from the pupil, and distant objects are more clearly discerned.”

He points out that the carving and workmanship generally are very superior to Indian pipe carvings, and adds, if this article was a work of the Mound-Builders “intended for a telescopic tube, it is a most interesting relic.” An ancient Peruvian relic, found a few years since, shows the figure of a man wrought in silver, in the act of studying the heavens through such a tube. Similar tubes have been found among relics of the Mound-Builders in Ohio and elsewhere. In Mexico, Captain Dupaix saw sculptured on a peculiar stone structure the figure of a man making use of one. Astronomical devices were sculptured below the figure. This structure he supposed to have been used for observation of the stars. His account of it will be given in the chapter on Mexican and Central American ruins.

The Mound-Builders used large quantities of copper such as that taken from the copper beds on Lake Superior, where the extensive mines yield copper, not in the ore, but as pure metal. It exists in those beds in immense masses, in small veins, and in separated lumps of various sizes. The Mound-Builders worked this copper without smelting it. Spots of pure silver are frequently found studding the surface of Lake Superior copper, and appearing as if welded to it, but not alloyed with it. No other copper has this peculiarity; but copper with similar blotches of silver has been dug from the mounds. It was naturally inferred from this fact that the ancient people represented by these antiquities had some knowledge of the art of mining copper which had been used in the copper region of Lake Superior. This inference finally became an ascertained fact.