Gas and Heat Damage to Books 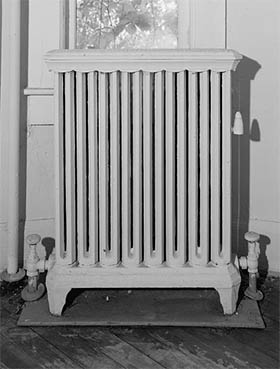 WHAT a valuable servant is Gas, and how dreadfully we should cry out were it to be banished from our homes; and yet no one who loves his books should allow a single jet in his library, unless, indeed he can afford a “sun light,” which is the form in which it is used in some public libraries, where the whole of the fumes are carried at once into the open air.

Unfortunately, I can speak from experience of the dire effect of gas in a confined space.  Some years ago when placing the shelves round the small room, which, by a euphemism, is called my library, I took the precaution of making two self-acting ventilators which communicated directly with the outer air just under the ceiling. For economy of space as well as of temper (for lamps of all kinds are sore trials), I had a gasalier of three lights over the table. The effect was to cause great heat in the upper regions, and in the course of a year or two the leather valance which hung from the window, as well as the fringe which dropped half-an-inch from each shelf to keep out the dust, was just like tinder, and in some parts actually fell to the ground by its own weight; while the backs of the books upon the top shelves were perished, and crumbled away when touched, being reduced to the consistency of Scotch snuff.  This was, of course, due to the sulphur in the gas fumes, which attack russia quickest, while calf and morocco suffer not quite so much.  I remember having a book some years ago from the top shelf in the library of the London Institution, where gas is used, and the whole of the back fell off in my hands, although the volume in other respects seemed quite uninjured.  Thousands more were in a similar plight.

As the paper of the volumes is uninjured, it might be objected that, after all, gas is not so much the enemy of the book itself as of its covering; but then, re-binding always leaves a book smaller, and often deprives it of leaves at the beginning or end, which the binder’s wisdom has thought useless.  Oh! the havoc I have seen committed by binders.  You may assume your most impressive aspect—you may write down your instructions as if you were making your last will and testament—you may swear you will not pay if your books are ploughed—‘tis all in vain—the creed of a binder is very short, and comprised in a single article, and that article is the one vile word “Shavings.”  But not now will I follow this depressing subject; binders, as enemies of books, deserve, and shall have, a whole chapter to themselves.

It is much easier to decry gas than to find a remedy.  Sun lights require especial arrangements, and are very expensive on account of the quantity of gas consumed.  The library illumination of the future promises to be the electric light.  If only steady and moderate in price, it would be a great boon to public libraries, and perhaps the day is not far distant when it will replace gas, even in private houses.  That will, indeed, be a day of jubilee to the literary labourer.  The injury done by gas is so generally acknowledged by the heads of our national libraries, that it is strictly excluded from their domains, although the danger from explosion and fire, even if the results of combustion were innocuous, would be sufficient cause for its banishment.

The electric light has been in use for some months in the Reading Room of the British Museum, and is a great boon to the readers.  The light is not quite equally diffused, and you must choose particular positions if you want to work happily.  There is a great objection, too, in the humming fizz which accompanies the action of the electricity.  There is a still greater objection when small pieces of hot chalk fall on your bald head, an annoyance which has been lately (1880) entirely removed by placing a receptacle beneath each burner.  You require also to become accustomed to the whiteness of the light before you can altogether forget it.  But with all its faults it confers a great boon upon students, enabling them not only to work three hours longer in the winter-time, but restoring to them the use of foggy and dark days, in which formerly no book-work at all could be pursued.

Heat alone, without any noxious fumes, is, if continuous, very injurious to books, and, without gas, bindings may be utterly destroyed by desiccation, the leather losing all its natural oils by long exposure to much heat. It is, therefore, a great pity to place books high up in a room where heat of any kind is as it must rise to the top, and if sufficient to be of comfort to the readers below, is certain to be hot enough above to injure the bindings.

The surest way to preserve your books in health is to treat them as you would your own children, who are sure to sicken if confined in an atmosphere which is impure, too hot, too cold, too damp, or too dry.  It is just the same with the progeny of literature.

If any credence may be given to Monkish legends, books have sometimes been preserved in this world, only to meet a desiccating fate in the world to come.  The story is probably an invention of the enemy to throw discredit on the learning and ability of the preaching Friars, an Order which was at constant war with the illiterate secular Clergy.  It runs thus:--“In the year 1439, two Minorite friars who had all their lives collected books, died.  In accordance with popular belief, they were at once conducted before the heavenly tribunal to hear their doom, taking with them two asses laden with books. At Heaven’s gate the porter demanded, ‘Whence came ye?’ The Minorites replied ‘From a monastery of St. Francis.’  ‘Oh!’ said the porter, ‘then St. Francis shall be your judge.’  So that saint was summoned, and at sight of the friars and their burden demanded who they were, and why they had brought so many books with them. ‘We are Minorites,’ they humbly replied, ‘and we have brought these few books with us as a solatium in the new Jerusalem.’ ‘And you, when on earth, practised the good they teach?’ sternly demanded the saint, who read their characters at a glance. Their faltering reply was sufficient, and the blessed saint at once passed judgment as follows:--‘Insomuch as, seduced by a foolish vanity, and against your vows of poverty, you have amassed this multitude of books and thereby and therefor have neglected the duties and broken the rules of your Order, you are now sentenced to read your books for ever and ever in the fires of Hell.’  Immediately, a roaring noise filled the air, and a flaming chasm opened in which friars, and asses and books were suddenly engulphed.”