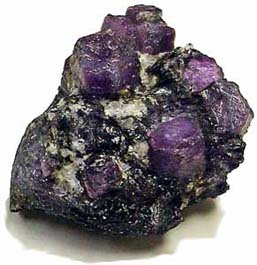 In Revelation, we find an interesting reference to "foundation stones," so-called because the author of Revelation lists these precious stones as decorating the foundations of the walls of the city in his vision, "that great city, the holy Jerusalem, descending out of heaven from God."  The foundation stones are described as follows:

And the foundations of the walls of the city were garnished with all manner of precious stones.  The first foundation was jasper; the second, sapphire; the third, a chalcedony; the fourth, an emerald;

The fifth, sardonyx; the sixth, sardius; the seventh, chrysolite; the eighth, beryl; the ninth, a topaz; the tenth, a chrysoprasus; the eleventh, a jacinth; the twelfth, an amethyst.

And the twelve gates were twelve pearls; every several gate was of one pearl; and the street of the city was pure gold, as it were transparent glass.

The significance of the twelve foundation stones, also referred to as "Apocalyptic Gems," was described thusly by Rabanus Maurus, Archbishop of Mainz (786 - 856):

In the jasper is figured the truth of faith; in the sapphire, the height of celestial hope; in the chalcedony, the flame of inner charity.  In the emerald is expressed the strength of faith in adversity; in the sardonyx, the humility of the saints in spite of their virtues; in the sard, the venerable blood of the martyrs.  In the chrysolite, indeed, is shown true spiritual preaching accompanied by miracles; in the beryl, the perfect operation of prophecy; in the topaz, the ardent contemplation of the prophecies.  Lastly, in the chrysoprase is demonstrated the work of the blessed martyrs and their reward; in the hyacinth, the celestial rapture of the learned in their high thoughts and humble descent to human things out of regard for the weak; in the amethyst, the constant thought of the heavenly kingdom in humble souls.