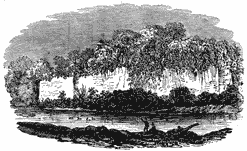 The ruins known as Copan are situated in the extreme western part of Honduras, where they are densely covered by the forest. As already stated, they were first discovered by Europeans about forty years after the war of the conquest swept through that part of the country, and were at that time wholly mysterious to the natives. The monuments seem older than those at Palenque, but we have only scant descriptions of them. They are situated in a wild and solitary part of the country, where the natives “see as little of strangers as the Arabs about Mount Sinai, and are more suspicious.” For this reason they have not been very carefully explored. It is known that these ruins extend two or three miles along the left bank of the River Copan. Not much has been done to discover how far they extend from the river into the forest.

Mr. Stephens describes as follows his first view of them: “We came to the right bank of the river, and saw directly opposite a stone wall from 60 to 90 feet high, with furze growing out of the top, running north and south along the river 624 feet, in some places fallen, in others entire.” This great wall supported the rear side of the elevated foundation of a great edifice. It was made of cut stone well laid in mortar or cement, the blocks of stone being 6 feet long. He saw next a square stone column standing by itself, 14 feet high and 3 feet on each side. From top to bottom it was richly ornamented with sculptured designs on two opposite sides, the other sides being covered with inscriptions finely carved on the stone. On the front face, surrounded by the sculptured ornaments, was the figure of a man. Fourteen other obelisks of the same kind were seen, some of them being higher than this. Some of them had fallen. These sculptured and inscribed pillars constitute the chief peculiarity of Copan. Mr. Squier says of them: “The ruins of Copan, and the corresponding monuments which I examined in the valley of the Chamelican, are distinguished by singular and elaborately carved monoliths, which seem to have been replaced at Palenque by equally elaborate basso relievos, belonging, it would seem, to a later and more advanced period of art.”

The great building first noticed stands, or stood, on a pyramidal foundation, which is supported along the river by that high back wall. The structure extends 624 feet on the river line. Mr. Stephens described it as an “oblong inclosure,” and states that it has a wide terrace nearly 100 feet above the river, on which great trees are growing, some of them more than 20 feet in circumference. Here, as at Palenque, the ornamentation was “rich and abundant.” The ruins, greatly worn by decay, still show that “architecture, sculpture, painting, and all the arts that embellish life had flourished in this overgrown forest.” Some beautifully executed sculptures were found buried in the earth, and there can be no doubt that extensive excavation, if it were possible in that almost invincible forest, would lead to important and valuable discoveries. Besides the great building and the monoliths, several pyramidal structures are mentioned by Mr. Stephens, who points out that extensive exploration is impossible unless one shall first clear away the forest and burn up the trees.

Palacios, who described this ruined city nearly three hundred years ago, saw much more than Mr. Stephens. He described “the ruins of superb edifices, built of hewn stone, which manifestly belonged to a large city.” He mentions, in connection with the great wall, an enormous eagle carved in stone, which bore a square shield on its breast covered with undecipherable characters. He mentions, also, a “stone giant,” and a “stone cross” with one arm broken. He saw a “plaza,” circular in form, surrounded by ranges of steps or seats, which reminded him of the Coliseum at Rome, “as many as eighty ranges still remaining in some places.” This “plaza” was “paved with beautiful stones, all square and well worked.” Six of the great obelisks, which he described as “statues,” stood in this inclosure, and in its centre was a great stone basin.

A history of Guatemala, by a writer named Huarros, states that the “Circus of Copan,” as he calls the “plaza” described by Palacios, was still entire in the year 1700. He mentions gateways which led into the inclosure, and says it was surrounded on the outside by stone pyramids six yards high, near which were standing sculptured figures or obelisks. No doubt, remains of this remarkable “circus” would be found now, if the forest should be removed. What else could be found there by means of careful and thorough exploration may never be known, for the region is uninviting, the forest very difficult, and such an exploration would require much more than the means and efforts of one or two individuals.

Not very far away, in the neighboring State of Guatemala, on the right bank of the River Motagua, to which the Copan is a tributary, are the ruins called Quirigua. It is manifest that a great city once stood here. These ruins have a close resemblance to those at Copan, but they appear to be much older, for they have, to a great extent, become little more than heaps of rubbish. Over a large space of ground traces of what has gone to decay are visible. Doubtless important relics of the old city are now more abundant below the surface than above it. Mr. Stephens, describing what he saw there, confines his attention chiefly to a pyramidal structure with flights of steps, and monoliths larger and higher than those at Copan, but otherwise similar. He states, however, that while they have the same general style, the sculptures are in lower relief and hardly so rich in design. One of the obelisks here is twenty feet high, five feet six inches wide, and two feet eight inches thick. The chief figures carved on it are that of a man on the front, and that of a woman on the back. The sides are covered with inscriptions similar in appearance to those at Copan. Some of the other standing obelisks are higher than this. It seems reasonable to infer that the structures at Quirigua were more ancient than those at Copan.