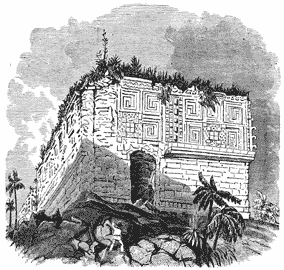 The ruins of Uxmal have been regarded as the most important in Yucatan, partly on account of the edifices that remain standing, but chiefly because they have been more visited and explored than the others. It is supposed, and circumstantial evidence appears to warrant the supposition, that this city had not been wholly deserted at the time of the Spanish Conquest, although it had previously begun to be a ruin. It was wholly a ruin in 1673. The area covered by its remains is extensive. Charnay makes it a league or more in diameter; but most of the structures have fallen, and exist now only in fragments scattered over the ground. It may be that many of them were not built wholly of hewn stone, and had not “Egyptian solidity” with their other characteristics.

The most important of those remaining was named “Casa del Gobernador” by the Spaniards. It is 320 feet long, and was built of hewn stone laid in mortar or cement. The faces of the walls are smooth up to the cornice. Then follows, on all the four sides, “one solid mass of rich, complicated, and elaborately sculptured ornaments, forming a sort of arabesque.”

This building has eleven doorways in front, and one at each end, all having wooden lintels, which have fallen. The two principal rooms are 60 feet long, and from 11 to 13 feet wide.

It stands on the summit of one of the grandest of the terraced foundations. This foundation, like all the others, is pyramidal. It has three terraces. The lowest is 3 feet high, 15 wide, and 575 long; the second is 20 feet high, 275 wide, and 545 long; the third, 19 feet high, 30 wide, and 360 long. Structures formerly existed on the second terrace, remains of which are visible. At the northwest corner one of them still shows its dilapidated walls, portions of them being sufficiently complete to show what they were. This edifice was 94 feet long and 34 wide. It seems to have been finely finished in a style more simple than that of the great “casa” on the upper terrace. The figures of turtles sculptured along the upper edge of the cornice have given it the current designation, “House of the Turtles.” Sculptured monuments have been found buried in the soil of the second terrace.

Another important edifice at Uxmal has been named “Casa de las Monjas,” House of the Nuns. It stands on a terraced foundation, and is arranged around a quadrangular court-yard 258 feet one way and 214 the other. The front structure is 279 feet long, and has a gateway in the centre 10 feet 8 inches wide leading into the court, and four doors on each side of it. The outer face of the wall, above the cornice, is ornamented with sculptures. The terrace without and within the enclosure was found covered with a very dense growth of vegetation, which it was necessary to clear away before the walls could be carefully examined. All the doorways, save those in front, open on the court. Mr. Stephens found the four great façades fronting the court-yard “ornamented from one end to the other with the richest and most intricate carving known to the builders of Uxmal, presenting a scene of strange magnificence which surpasses any other now seen among its ruins.” The long outer structure, on the side facing the entrance, had high turret-like elevations over each of its thirteen doorways, all covered with sculptured ornaments. This building appears to have enclosed another of older date.

Other less important edifices in the ruins of Uxmal have been described by explorers, some of which stand on high pyramidal mounds; and inscriptions are found here, but they are not so abundant as at Palenque and Copan.