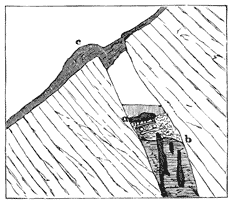 Remains of their mining works were first discovered in 1848 by Mr. S. O. Knapp, agent of the Minnesota Mining Company, and in 1849 they were described by Dr. Charles T. Jackson, in his geological report to the national government. Those described were found at the Minnesota mine, in upper Michigan, near Lake Superior. Their mining was chiefly surface work; that is to say, they worked the surface of the veins in open pits and trenches. At the Minnesota mine, the greatest depth of their excavations was thirty feet; and here, “not far below the bottom of a trough-like cavity, among a mass of leaves, sticks, and water, Mr. Knapp discovered a detached mass of copper weighing nearly six tons. It lay upon a cob-work of round logs or skids six or eight inches in diameter, the ends of which showed plainly the marks of a small axe or cutting tool about two and a half inches wide. They soon shriveled and decayed when exposed to the air. The mass of copper had been raised several feet, along the foot of the lode, on timbers, by means of wedges.” At this place was found a stone maul weighing thirty-six pounds, and also a copper maul or sledge weighing twenty-five pounds. Old trees showing 395 rings of annual growth stood in the debris, and “the fallen and decayed trunks of trees of a former generation were seen lying across the pits.” The figure above presents a section of this mining shaft of the Mound-Builders: a shows the mass of copper; b the bottom of the shaft; c the earth and debris which had been thrown out. The dark spots are masses of copper.

The modern mining works are mostly confined to that part of the copper region known as Keweenaw Point. This is a projection of land extending into Lake Superior, and described as having the shape of an immense horn. It is about eighty miles in length, and, at the place where it joins the main land, about forty-five miles in width. All through this district, wherever modern miners have worked, remains of ancient mining works are abundant; and they are extensive on the adjacent island, known as Isle Royale. The area covered by the ancient works is larger than that which includes the modern mines, for they are known to exist in the dense forests of other districts, to which the modern mining has not yet been extended.

One remarkable mining excavation of the Mound-Builders was found near the Waterbury mine. Here, in the face of a vertical bluff, was discovered “an ancient, artificial, cavern-like recess, twenty-five feet in horizontal length, fifteen feet high, and twelve feet deep. In front of it is a pile of excavated rock on which are standing, in full size, the forest trees common to this region.” Some of the blocks of stone removed from this recess would weigh two or three tons, and must have required levers to get them out. Beneath the surface rubbish were the remains of a gutter or trough made of cedar, placed there to carry off water from the mine. At the bottom of the excavation a piece of white cedar timber was found on which were the marks of an axe. Cedar shovels, mauls, copper gads or wedges, charcoal, and ashes were discovered, over which “primeval” forest trees had grown to full size.

Modern mining on Lake Superior began effectively in 1845. The whole copper region has not been fully explored. Works of the ancient miners are found at all the mines of any importance; and they show remarkable skill in discovering and tracing actual veins of the metal. Colonel Charles Whittlesey, one of the best authorities on this point, believes the Mound-Builders worked the copper-beds of that region during “a great length of time,” and more of their works will undoubtedly be explored when the forests shall be cleared away from those portions of the copper region not yet worked by modern miners. So far as they have been traced, they every where show the same methods, the same implements, and the same peculiarities of both knowledge and lack of knowledge in the old miners.