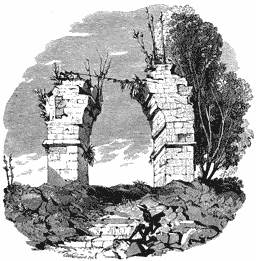 The ruins known as Kabah are on the site of what must have been one of the most imposing and important of the more ancient cities. Here the most conspicuous object is a stone-faced mound 180 feet square at the base, with a range of ruined apartments at the bottom. Three or four hundred yards from this mound is a terraced foundation 20 feet high and 200 by 142 in extent, on which stand the remains of a great edifice. At the right of the esplanade before it is a “high range of ruined structures overgrown with trees, with an immense back wall on the outer line of the esplanade perpendicular to the bottom of the terrace.” On the left is another range of ruined buildings, and in the centre a stone enclosure 27 feet square and 7 feet high, with sculptures and inscriptions around the base. Some of the ornamentation of this building has been described in the strongest terms of admiration. Mr. Stephens said of it, “The cornice running over the doorways, tried by the severest rules of art recognized among us, would embellish the architecture of any known era.” At Uxmal the walls were smooth below the cornice; here they are covered with decorations from top to bottom.

This field of ruins is extensive, and only a portion of it has been examined. It is so overgrown that exploration is very difficult. The buildings and mounds are much decayed, and they seem to be very old. It is believed that ruined edifices of which nothing is known are hidden among the trees in places which no explorer has approached. Mr. Stephens gave the first account of Kabah, and described three other important edifices besides that already named. One of these he thought was, when entire, the most imposing structure at Kabah. It was 147 feet long by 106 wide, and had three distinct stories, each successive story being smaller than that below it. Another, standing on the upper terrace of an elevated foundation 170 feet long by 110 broad, was 164 feet in length, and comparatively narrow. It is mentioned as a peculiarity of this edifice that it had pillars in its doorways, used as supports. The other, found standing on a terrace, is also long and narrow, and has a comparatively plain front.

Remains of other buildings are visible, but in all cases they are so completely in ruins as to be little more than heaps of debris. Some of the ruins in the woods beyond that part of the field which is most accessible, are visible from the great mound described. A resolute attempt to penetrate the forest brought the explorers in view of great edifices standing on an elevated terrace estimated to be 800 feet long by 100 feet wide. The decorations seemed to have been abundant and very rich, but the structures were in a sad state of dilapidation. One remarkable monument found at Kabah resembles a triumphal arch. It stands by itself on a ruined mound apart from the other structures. It is described as a “lonely arch, having a span of 14 feet,” rising on the field of ruins “in solitary grandeur.”

Kabah was an ancient city. The ruins are old, and the city may have belonged to the first age of the Maya period.