The Interpretation of Idealism 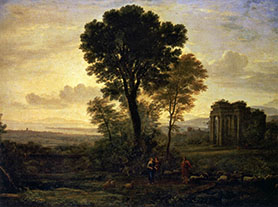 [This is taken from Hamilton Wright Mabie's Books and Culture.]

Idealism has so often been associated in recent years with vagueness of thought, slovenly construction, and a weak sentimentalism, that it has been discredited, even among those who have recognised the reality behind it and the great place it must hold in all rich and noble living. It is the misfortune of what is called Idealism, that, like other spiritual principles, it attracts those who mistake the longings of unintelligent discontent for aspiration, or the changing outlines of vapory fancies for the firm and consistent form and shape of real conceptions deeply realised in the imagination. Idealism has suffered much at the hands of feeble practitioners who have substituted irrational dreams for those far-reaching visions and those penetrating insights which are characteristic of its true use and illustration in the arts. The height of the reaction so vigorously and impressively illustrated in a great group of modern realistic works is due largely to the weakness and extravagance of the idealistic movement. When sentiment is exchanged for its corrupting counterfeit, sentimentalism, and clear and definite thinking gives place to vague and elusive emotions and fancies, reaction is not only inevitable but wholesome; the instinct for sanity in men will always prevent them from becoming mere dreamers and star-gazers.

The true Idealist has his feet firmly planted on reality, and his idealism discloses itself not in a disposition to dream dreams and see visions, but in the largeness of a vision which sees realities in the totality of their relations and not merely in their obvious and superficial relations. It is a great mistake to discern in men nothing more substantial than that movement of hopes and longings which is so often mistaken for aspiration; it is equally a mistake to discern in men nothing more enduring and aspiring than the animal nature; either report, standing by itself, would be fundamentally untrue. Man is an animal; but he is an animal with a soul, and the sane view of him takes both body and soul into account. The defect of a good deal of current Realism lies in its lack of veracity; it is essentially untrue, and it is, therefore, fundamentally unreal. The love of truth, the passion for the fact, the determination to follow life wherever life leads, are noble, artistic instincts, and have borne noble fruit; but what is often called Realism has suffered quite as much as Idealism from weak practitioners, and stands quite as much in need of rectification and restatement.

The essence of Idealism is the application of the imagination to realities; it is not a play of fancy, a golden vision arbitrarily projected upon the clouds and treated as if it had an objective existence. Goethe, who had such a vigorous hold upon the realities of existence, and who had also an artist's horror of mere abstractions, touched the heart of the matter when he defined the Ideal as the completion of the real. In this simple but luminous statement he condensed the faith and practice not only of the greater artists of every age, but of the greater thinkers as well. In the order of life there can be no real break between things as they now exist and things as they will exist in the remotest future; the future cannot contradict the present, nor falsify it; for the future must be the realisation of the full possibilities of the present. The present is related to it as the seed is related to the flower and fruit in which its development culminates. There are vast changes of form and dimension between the seed and the tree hanging ripe with fruit, but there is no contradiction between the germ and its final unfolding.

A rigid Realism, however, sees in the seed nothing but its present hardness, littleness, ugliness; a true and rational Idealism sees all these things, but it sees also not only appearances but potentialities; or, to recall another of Goethe's phrases, it sees the object whole.

To see life clearly and to see it whole is not only to see distinctly the obvious facts of life, but to see these facts in sequence and order; in other words, to explain and interpret them. The power to do this is one of the signs of a great imagination; and, other things being equal, the rank of a work of art may, in the last analysis, be determined by the clearness and veracity with which explanation and interpretation are suggested. Homer is, for this reason, the foremost writer of the Greek race. He is wholly free from any purpose to give ethical instruction; he is absolutely delivered from the temptation to didacticism; and yet he reveals to us the secret of the temperament and genius of his race. And he does this because he sees in his race the potentialities of the seed; the vitality, beauty, fragrance, and growth which lie enfolded in its tiny and unpromising substance. If the reality of a thing is not so much its appearance as the totality of that which is to issue out of it, then nothing can be truly seen without the use of the imagination. All that the Idealist asks is that life shall be seen not only with his eyes but with his imagination. His descriptions are accurate, but they are also vital; they give us the thing not only as it looked standing by itself, but as it appeared in the complete life of which it was a part; he makes us see the physical side of the fact with great distinctness, but he makes us see its spiritual side as well. As a result, there is left in our minds by the intelligent reading of Homer a clear impression of the spiritual, political, and social aptitudes and characteristics of the Greek people of his age,—an impression which no exact report of mere appearances could have conveyed; an impression which is due to the constant play of the poet's imagination upon the facts with which he is dealing.

This is true Idealism; but it is also true Realism. It is not only the fact, but the truth. The fact may be observed, but the truth must be discerned by insight,—it is not within the range of mere observation; and it is this insight, this discernment of realities in their relation to the whole order of things, which characterises true Idealism, and which makes all the greater writers Idealists in the fundamental if not in the technical sense. Tolstoi has often been called a Realist by those who are eager to label everything and everybody succinctly; but Tolstoi is one of the representative Idealists of his time, and his "Master and Man" is one of the most touching and sincere bits of true Idealism which has been given the world for many a day.

There is nothing which needs such constant reinforcement as this faculty of seeing things in their totality; for we are largely at the mercy of the hour unless we invoke the aid of the imagination to set the appearances of the moment in their large relations. To the man who sees things as they rush like a stream before him, there is no order, progression, or intelligent movement in human affairs; but to the student who brings to the study of current events wide and deep knowledge of the great historic movements, these apparently unrelated phenomena disclose the most intimate inter-relations and connections. The most despairing pessimism would be born in the heart of the man who should be fated to see to-day apart from yesterday and to-morrow; a rational and inspiring hope may be born in the soul of the man who sees the day as part of the year and the year as part of the century. The great writers are a refuge from the point of view of the moment, because they set the events of life in a fundamental order, and make us aware of the finer potentialities of our race. They are Idealists in the breadth of their vision and the nobility of the interpretation of events which they offer us.