I admit it; I am an absolute fool for Christmas movies.

Remember that made-for-television Christmas movie with Jaclyn Smith and Paul Williams?  Of course you don't.  It was called "The Night They Saved Christmas," and it was made in 1984.  You might never consider watching such a film.  But I would - and did.  (We've recently heard from one reader who loved this movie - is it time to watch it again?) Don't even think of condemning yourself as being as bad as I am about Christmas movies unless you, too, own Mr. Magoo's Christmas Carol on DVD.  (I like the songs, especially that one about Razzleberry Dressing....)

So, with myself and so many other fans of Christmas films, why are there so many less-than-great Christmas movies?  It probably has something to do with the laws of supply and demand.  During the holiday season, most of us want to watch movies about the holidays.  Consequently, there's a big demand.  But it's hard work to write a great script for a Christmas film, and difficult to produce one.  Thus, we have a lot of cinematic offerings that, were they not about Christmas, would probably never have been made. 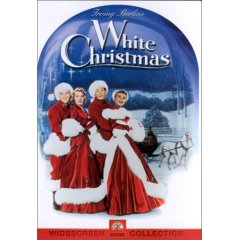 On the other hand, some of the best-loved films of all time have been Christmas-related.  Scenes from these movies stand out in our minds clearly: Bing Crosby and Danny Kaye putting on a show, Judy Garland writing Christmas cards, Jimmy Stewart telling Donna Reed that it is, indeed, a wonderful life.

What follows is a list of my favorite Christmas films; it does not pretend to be the indisputable last word on the subject.  It is not based on popularity polls.  It is subjective.  If I've left off your favorite film, don't despair.  If there's a Christmas movie on this list that you haven't seen yet, get going!

Short list, right?  Of course, a new one could come along any day now.  I'll be watching.

Somehow, I never got around to watching A Christmas Carol; that is to say, the film of that title made in 1951, starring Alastair Sim.  It's on my list of Christmas movies to watch in 2009.

Another Christmas movie I'll be seeing for the first time in 2009 is Holiday Affair, starring Robert Mitchum, Janet Leigh, and Wendell Corey.  The film was made in 1949, and since I like the three stars of the film, and I like Christmas movies, I'm thinking I should like this movie.

Criticize me all you want.....