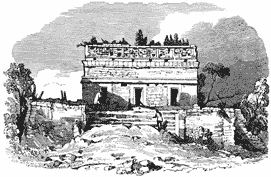 The ruins of Chichen-Itza are situated east of Mayapan, about half way between the eastern and western coasts of the peninsula of Yucatan. A public road runs through the space of ground over which they are spread. The area covered by them is something less than a mile in diameter. The general character of the ruined structures found here is in every respect like that shown by ruins already described.

One of the great buildings at this place has a rude, unornamental exterior, and does not stand on an artificial terrace, although the ground before it was excavated so as to give the appearance of an elevated foundation. It is one hundred and forty-nine feet long by forty-eight deep. Its special peculiarity consists of a stone lintel, in a very dark inner room, which has an inscription and a sculptured figure on the under side. The writing closely resembles that seen at Palenque and Copan. Was this sculptured stone made originally for the place it now occupies, or was it taken from the ruins of some older city which flourished and went to decay before Chichen-Itza was built?

Another structure seen here closely resembles Las Monjas at Uxmal, and bears the same name, but it differs somewhat from the Uxmal Monjas in arrangement. In the descriptions, special mention is made of “the richness and beauty” of its ornaments.

A noticeable edifice connected with the Monjas, called the “Church,” is 26 feet long, 14 deep, 31 high, and has three cornices, the spaces between them being covered with carved ornaments. There is but one room in it. One of the most picturesque ruins at Chichen-Itza is circular in form, and stands on the upper level of a double-terraced platform. It is 22 feet in diameter, and has four doors, which face the cardinal points. Above the cornice it slopes gradually almost to a point, and the top is about 60 feet above the ground. The grand staircase of 20 steps, leading up to this building, is 45 feet wide, and has a sort of balustrade formed of the entwined bodies of huge serpents. At some distance from this is the ruined structure known as the “Casa Colorada,” or Red House.

It is 43 feet long by 23 deep, and stands on a platform 62 feet long by 55 wide. It was ornamented above the cornice, but the decorations are much defaced by decay. A stone tablet extending the whole length of the back wall, inside, is covered by an inscription.

A remarkable structure is found at this place, which Mr. Stephens called the “Gymnasium, or Tennis Court.” It consists of two immense parallel walls 274 feet long, 30 thick, and 120 apart. On elevations facing the two ends of the open space between them, 100 feet from the ends of the walls, stand two edifices much ruined, but showing, in their remains, that they were richly ornamented. Midway in the length of the walls, facing each other, and 20 feet above the ground, are two massive stone rings or circles 4 feet in diameter, each having in the centre a hole 1 foot and 7 inches in diameter. On the borders around these holes two entwined serpents are sculptured. 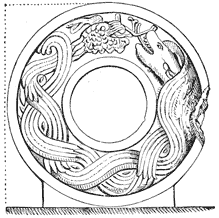 There was a similar structure in the old city of Mexico, and remains of one like it are found at Mayapan. They were, probably, used for games of some kind. Among the other ruins at Chichen-Itza are the remains of a lofty edifice which has two high ranges or stories. On the outside the ornamentation is simple and tasteful, but the walls of its chambers are very elaborately decorated, mostly with sculptured designs, which seem to have been painted. In one of the upper rooms Mr. Stephens found a beam of sapote wood used as a lintel, which was covered with very elegantly carved decorations. The walls of this room were covered, from the bottom to the top of the arched ceiling, with painted designs similar to those seen in the Mexican “picture writing.” Decay had mutilated these “pictures,” but the colors were still bright. There are indications that painting was generally used by the aboriginal builders, even on their sculptures. The colors seen in this room were green, red, yellow, blue, and reddish-brown. Another edifice, standing on a high mound, is reached by means of the usual great stairway, which begins at the bottom, with a sort of balustrade on each side, the ends of which are stone figures of heads of immense serpents.

Not far from this is a singular ruin, consisting of groups of small columns standing in rows five abreast, the tallest being not more than six feet high. Many of them have fallen. It is impossible to determine how they were used, or what they mean.